Vasaka: Getting to Know Your Herbal Allies

Tulsi (Holy Basil): Getting to Know Your Herbal Allies

Our respiratory systems provide one of the most important rhythms of our lives. Through our breath, this system welcomes in oxygen and prana (the vital life-giving force, central to Ayurveda) into our bodies—in fact, the breath is the main way we bring in prana. But what do we do when this system needs a little extra love and support? Luckily for us, we have the abundant Ayurvedic pharmacopoeia at our fingertips.

You may already be familiar with some of the quintessential herbs that support a healthy respiratory system, like tulsi, pippali, licorice, and even ginger—but what do you know about vasaka? If that name doesn’t ring a bell, well, you’re in good company, as it is little known in the West outside the circles of herb enthusiasts and practitioners.

Vasaka is an ancient herb that has been used in Ayurvedic formulas for ages. Let’s take a moment now and look a little more closely at vasaka to see what makes it such a timeless and steadfast herbal ally. 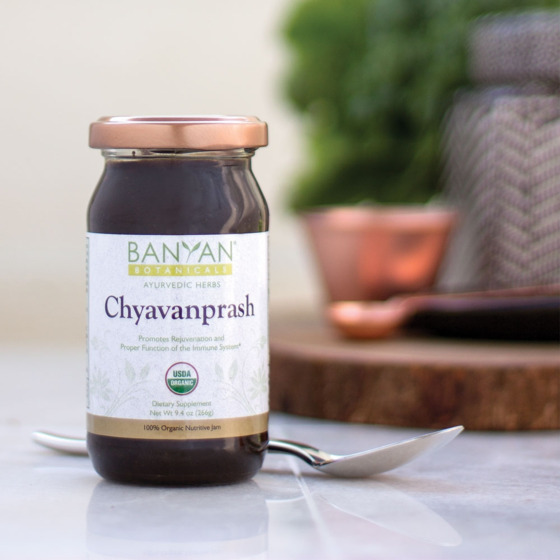 Vasaka In the Landscape

Vasaka may not be readily recognized in our society, but it is well-known in India. If we were to travel to the Indian subcontinent, we would find that this small evergreen shrub is a common part of the landscape. It happily grows in dry climates and dry soil (although it can also be found growing in tropical areas), and it stretches across the Indian plains up to the foothills of the Himalayas.1

We would even see volunteers of this plant lining the roadways throughout the land.2 While the shrubs themselves are nothing remarkable in appearance, their flowers are their crowning glory. (For you gardeners out there, vasaka would be worth growing for its flowers alone.)

One of vasaka’s names—vasa—translates as “perfume,” and it can be safe to bet that this name stems from the plant’s flamboyant flowers.3 In fact, thanks to these flowers, vasaka is also known in Sanskrit botany as “lion’s muzzle” and “stallion’s tooth”—two undeniably powerful names that honor the strength of the plant.4 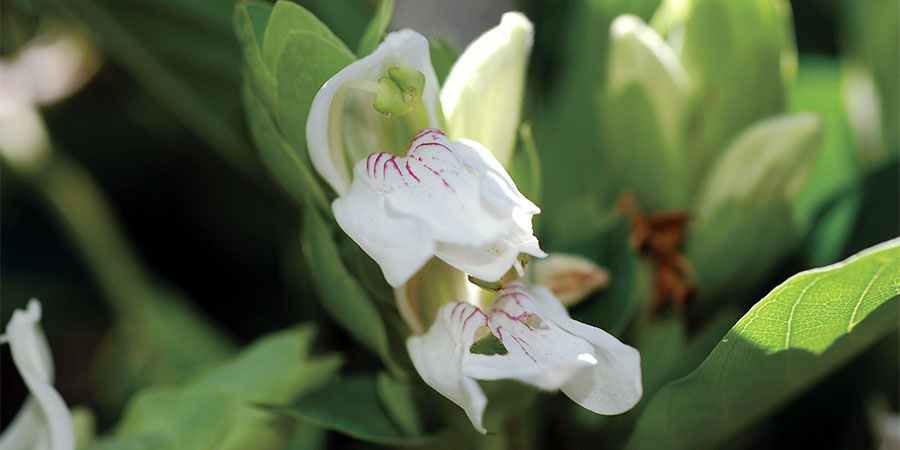 An Herb with History

Vasaka's prevalence in India can also be found in the inventories of practitioners. It is recognized as a powerful herbal aid that brings potent support to the lungs and respiratory system, with a few additional (but no less valued) benefits.

There is a popular Bengali saying that particularly captures the community’s respect for vasaka, translating as, “a man cannot die of disease in an area where Vitex negundo (bana), Adhatoda vasica (vasaka), and Acorus calamus (calamus) are found, provided that he knows how to use them.”5

Such marked respect for its power isn’t a new experience for vasaka. On the contrary—this sort of saying is backed by vasaka’s reputation, and this sort of reputation takes years in the making—thousands of years, to be exact.

Its first recorded mention can be traced all the way back to the Atharvaveda, the ancient Vedic text that is thought to be the root of Ayurvedic herbalism.6

This alone alludes to its longstanding and elevated place in India and in Ayurveda—not to mention the fact that generation after generation has passed along the knowledge of how to use vasaka. This certainly is a deep reputation backed by several millennia of human experience and benefit. 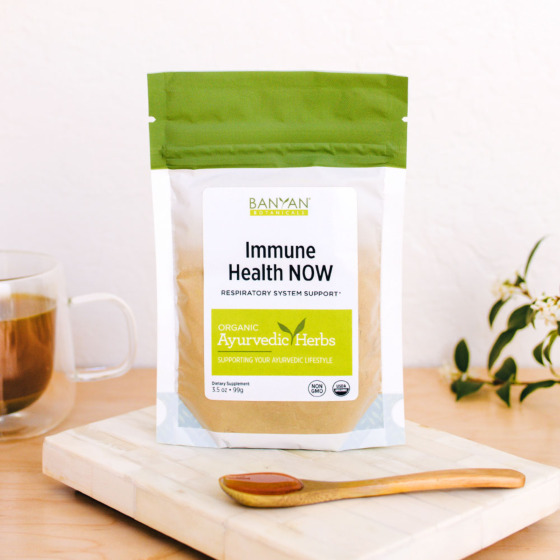 The Benefits of Vasaka

Vasaka and the Lungs

Thankfully, this powerful herbal ally—and the wisdom of how to use it—is still available to us today. As we have mentioned, vasaka brings powerful support to the lungs and respiratory system, particularly when excess pitta and kapha are involved.

Due to its expectorant action, it greatly helps with relieving excess kapha that causes occasional respiratory congestion. And, as it promotes healthy bronchodilation, it also helps with easy, comfortable, and relaxed breathing.7 As an added bonus, vasaka promotes the lungs’ ability to receive more prana and more oxygen.

Because vasaka is such a powerful herb, it is most commonly taken as part of a formula, rather than as a single herb.

There are a great many Ayurvedic formulas that harness vasaka’s special work in the lungs and respiratory system. For example, anthrapachaka (Indian ipecac), bibhitaki, licorice, pippali, and vasaka combine well to support healthy, even bronchodilation while removing excess kapha congestion in the lungs.

Our Lung Formula tablets and Bronchial Support herbal syrup are both tridoshic formulas that use the power of vasaka in combination with other herbs well-known for their affinity for the lungs, offering deep support to the healthy function of the respiratory tract.

Our Immune Health NOW is packed with some of the most powerful herbs in the Ayurvedic pharmacopoeia, including vasaka. This blend bolsters the body’s immune defenses, while also supporting healthy lungs and promoting a strong and robust respiratory tract.

One of our favorite ways to support the lungs is with Chyavanprash! This delectable herbal jam combines a plethora of health-building herbs, but definitely leans on vasaka’s ability to support healthy lungs and respiration.

Lastly, if you’re looking for a simple and tasty way to support easy, regular, and deep breathing, you can try adding vasaka to trikatu and honey.

Other Benefits of Vasaka

Keeping with the theme of cleaning out excess pitta and kapha, vasaka also helps balance rasa and rakta dhatus (plasma and blood tissue layers). Vasaka helps clear out excess pitta in rakta dhatu, which may manifest in the form of excess heat, while also clearing out kapha that has become stuck in rasa dhatu.

Cleaner, healthier dhatus often mean healthier and more beautiful skin. Adding vasaka to manjistha, neem, and chrysanthemum can help level out skin imbalances that are rooted in these aggravated dhatus.8  Vasaka can also help with pitta type issues relating to the blood, but this application of vasaka is advanced and requires the guidance of an Ayurvedic practitioner.9 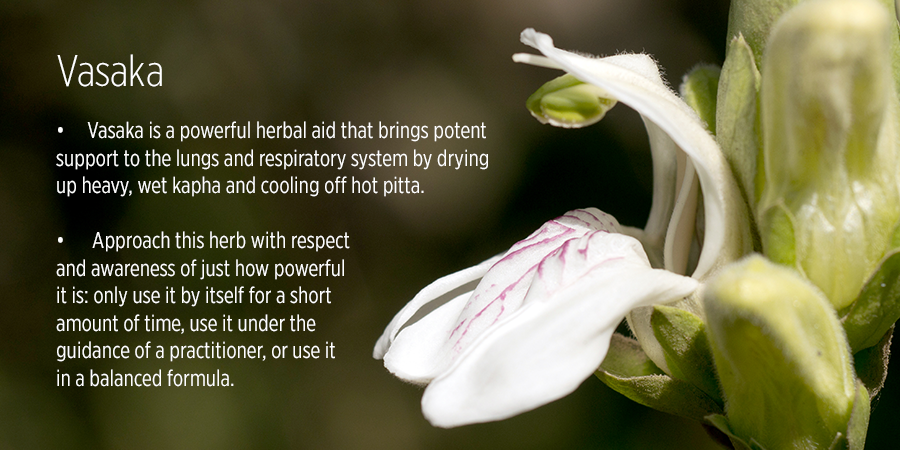 Vasaka’s Energetics and Effect on the Doshas

Vasaka’s power can be explained through the lens of its herbal energetics. As we explore vasaka powder, we notice that the vibrant green of the fresh leaves has turned a dark, almost brown color. And the smell! Powdered vasaka’s rather strong smell is a foreshadowing of its taste (its name of “perfume” certainly doesn’t come from the powder).

Once that powder hits our taste buds, there’s no mistaking how bitter and astringent this herb is. We’re not sure about you, but we will never forget what vasaka tastes like!

The bitter and astringent tastes that comprise vasaka’s rasa (taste) speak volumes to its energetics and its power. The bitter taste cools off pitta while it lightens and dries out kapha. It’s also great for clearing things out—heat, ama, congestion, and excess moisture throughout, as well as toxins or stagnation in rakta dhatu.10

The astringent taste also dries out kapha while it chills out pitta.11 These tastes combined make a dynamic duo, and they certainly back vasaka’s ability to conquer kapha and pitta imbalances that may settle in the respiratory tract or even in rasa or rakta dhatu.

Vasaka’s virya (temperature) is pretty cooling, which is another reason why it is indicated to help calm angry, aggravated pitta, particularly when it settles in the respiratory tract.

When to Use Caution

Vasaka’s energetics are remarkably similar to vata dosha, and Ayurveda believes that like increases like, so it goes to reason that vasaka can easily increase and aggravate vata. Also, with all this coldness, it is not recommended for long-term use by itself, as it can inadvertently damage agni (digestive fire).

Furthermore, vasaka causes constriction throughout the body, including in the female reproductive system, causing the uterus to contract. Under some conditions, this action may be warranted, but it certainly is not recommended during pregnancy.12 Ultimately, because vasaka is so powerful and is rather extreme in its energetics, it is best to use it in a formula to even out its intense qualities, or to use under the guidance of a practitioner.

Upon learning just how much vasaka can do for the respiratory system (and more!), it is no wonder that so many generations have passed along the knowledge of this herb after benefitting from it. We’re so thankful they did! With a healthy respect for just how powerful this ancient herb is, we know we can support our lungs and respiratory systems with this timeless and steadfast ally—and this makes us breathe a sigh of relief.

Building a Healthy Immune System
More For You
Breathe Easy
How would your life be different if your breath were more relaxed, more fluid—less disturbed by congestion, stress, or worries—if you could simply breathe easy?
Full Yogic Breath
Full Yogic Breath is a deeply balancing pranayama (breathing exercise) that benefits vata, pitta, and kapha. It is sometimes known as three-part breath because it works with three different sections of the torso and naturally engages all three lobes of the lungs.

1 “Adhatoda Vasica—Health Benefits and Side Effects.” The Herbal Resource. https://www.herbal-supplement-resource.com/adhatoda-vasica.html.

4 Naveen Patnaik, The Garden of Life: an Introduction to the Healing Plants of India (Madison: Doubleday, 1993), 58.