Pippali: Getting to Know Your Herbal Allies

Kalmegh: Getting to Know Your Herbal Allies

For many of us, black pepper is so popular we’d be surprised to find it missing from any dining experience. But have you heard of black pepper’s close relative, pippali? Here in the West, it doesn’t get as much recognition, but pippali, or Piper longum, is among the most celebrated of Ayurvedic herbs and has been for centuries. Renowned as a unique culinary spice and for its tremendous benefits to the respiratory system, this rejuvenating herb is worth learning more about.

The first references to pippali, commonly known as long pepper, are found in ancient Vedic texts, where its health benefits and dietary effects were mentioned at length.1 Its uses were varied among the digestive, respiratory, and reproductive systems of the body, and it was famously combined with black pepper and ginger to create the classic Ayurvedic formula trikatu. It was also mentioned very early in Sanskrit literature in collections of poetry (dated around 1000 and 500 BC) due to its native growing region of northeastern India, very near the northwestern part of the subcontinent where Sanskrit was spoken at the time.2 Pippali later spread to Greece during the 6th century BC where Hippocrates used it in his therapeutic practice.3 Eventually, pippali made its way into the spice trade through the Greeks and the Romans where it became one of the most valuable of Indian exports, but not without its own complications.4

There may not be any specific event known as the “Great Pepper Mix-Up,” but pippali’s history is often misunderstood and interlinked with that of other peppers. In fact, it was traded alongside black pepper, and both were called piper and mistakenly thought to be from the same plant throughout much of Europe.5 Additionally, pippali has been confused with pimento, a long Spanish chili, and again with another species of long pepper (Piper retrofractum) native to the island of Java, which was occupied by the Dutch East India Company.6,7 Talk about a pepper identity crisis. 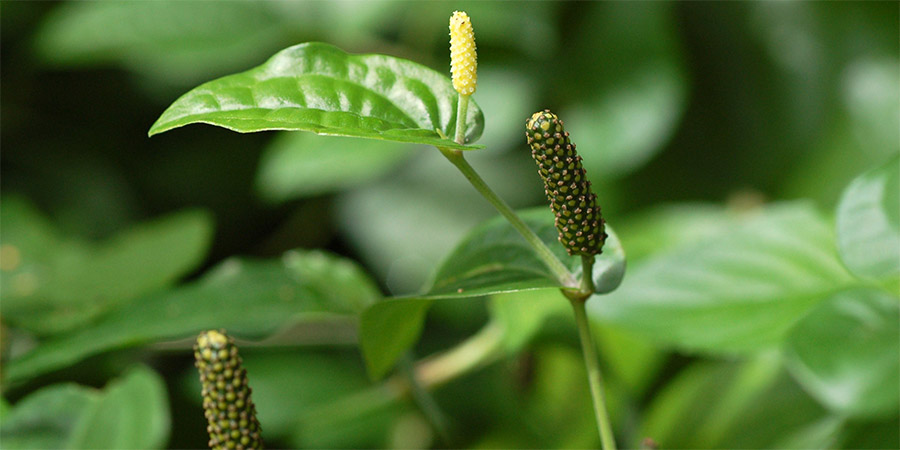 Call it what you will, pippali’s botanical characteristics are hard to mistake. This small, perennial, flowering vine grows among the shade and humidity of tropical forests and likes to climb on larger plants. It prefers more temperate conditions than its counterpart, black pepper.8 The pippali plant is aromatic with a spicy smell, and the branches are thin with heart-shaped leaves.9 Its oblong, army green fruits (sometimes called the flowers and often compared to hazel catkins)10 are harvested and dried for culinary or herbal use. This process can sometimes be a labor of love: each plant produces just a few fruits at a time and doesn’t propagate or transplant as easily as other plants in the Piperaceae family. This may have been the unfortunate reason pippali eventually lost some of its ancient fame.11 Regardless of its labor-intensive harvest, you can be sure that any pippali purchased through Banyan Botanicals is sustainably sourced, certified organic, and traded fairly. 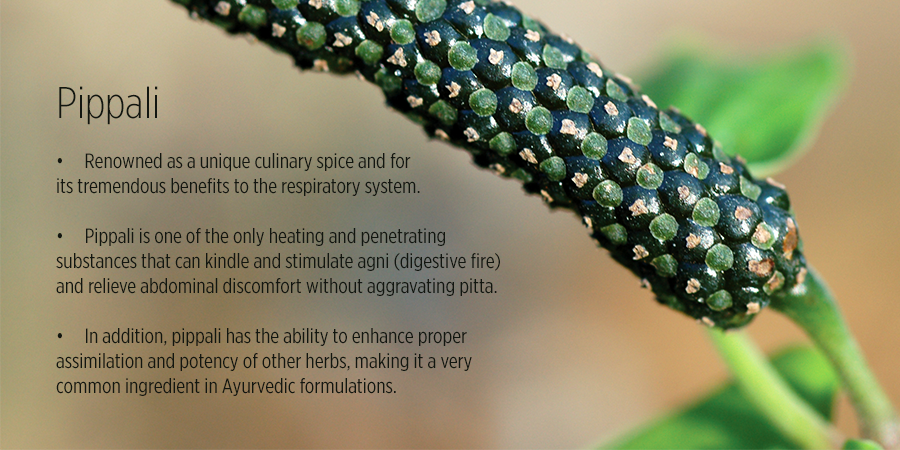 So What Does It Do?

Today, pippali has endured as an essential part of Ayurveda, and for good reason. As a culinary spice, it has been revered for its unique combination of the pungent taste and sweet post-digestive effect. This mix is important because most herbs and foods with hot energy (for instance, black pepper, dried ginger, and cayenne) are too dry and warming for those with pitta constitutions or imbalances.

Pippali is one of the only heating and penetrating substances that can kindle and stimulate agni (digestive fire) and relieve abdominal discomfort without aggravating pitta.12

As an herbal remedy, pippali’s rejuvenating qualities strengthen and nourish many systems of the body. It improves metabolism (as mentioned), promotes healthy circulation, strengthens reproductive functions, and supports a healthy liver.13 But its most celebrated power lies in its ability to rejuvenate the lungs and respiratory system. The warming energy of pippali stimulates prana agni, the fire principle present in the respiratory tract, and removes cold ama and kapha from the lungs.14

In addition to all of that, pippali has the ability to enhance proper assimilation and potency of other herbs, making it a very common ingredient in Ayurvedic formulations. In fact, you’ll find pippali in small amounts of more than thirty-five different Banyan products!

It’s not a competition, but given its history with black pepper, I think you could say pippali is one spice “worth its salt.”

Okay, raise your hand if you’re familiar with the Ayurvedic herb chitrak. Anyone? Chitrak will give you heroic support, from fueling your digestive fire to aiding in healthy weight management, from destroying ama to revitalizing kapha—and so much more.

Amalaki: Getting to Know Your Herbal Allies

Amalaki, also known as amla, is the perfect herb to welcome into practically everyone’s daily routines. Read this article to learn how it can be a true lifelong herbal ally.