Amalaki: Getting to Know Your Herbal Allies

Amalaki (Emblica officinalis) is one of the most popular herbs in the Ayurvedic pharmacopoeia—and for good reason. Sattvic, versatile, rejuvenating, and great for all doshas, amalaki is the perfect herb to welcome into practically everyone’s daily routines, either on its own or in a formula. This versatility and the deep support it provides to overall health and well-being makes amalaki an enduring favorite here at Banyan!

Whether you already have a strong relationship with amalaki or you’re just getting acquainted with it, you may find, as we have, that amalaki is a true lifelong ally, one that loyally offers daily support on the quest for balance. It’s nothing short of inspirational in all that it offers!

Amalaki in the Landscape

The amalaki tree grows throughout the subcontinent of India. These somewhat small trees (at least, compared to other beloved trees used in Ayurvedic herbalism, like the giant bibhitaki and the towering neem) grow wild throughout the landscape.

Amalaki lends itself to domestication as well, and farm-cultivated trees are also common in India. If you would like to learn more about where Banyan gets our amalaki, check out this great article!

The trees themselves are slim and graceful with airy, feathery leaves, and vibrant green, small, round, and surprisingly hard fruits. These fruits contain the magic of amalaki that Ayurveda has reverently used for millennia. Tasting an amalaki fruit will give you a direct experience of one of its names—amla, which translates as sour because—you guessed it!—amalaki is incredibly sour! 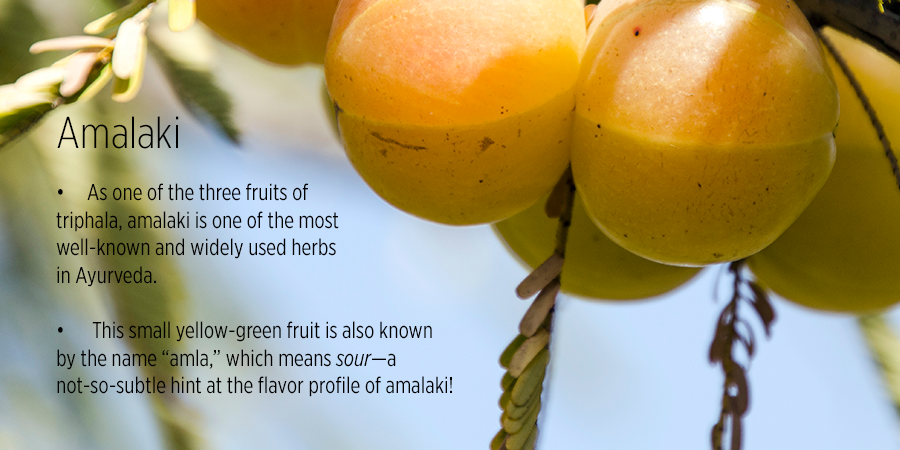 Another name for amalaki is dhatri, which translates as both nurse and mother—or nurse mother—and even as immortality.1 These various translations summarize amalaki’s deeply revered reputation. In fact, all historical references, legends, and myths that include amalaki (and believe us, there are a lot!) shed some light on how amalaki truly deserves the name of dhatri.

To explore this a little, let’s look at a couple of these legends and myths. In one of amalaki’s creation myths (that’s right, there is more than one), as recorded in the ancient Hindi text Brihaddharma Purana, the amalaki tree is said to have sprouted from the divine tears of the goddesses Lakshmi and Parvati as they searched for a new way to worship the gods Vishnu and Shiva.2

Indeed, amalaki has a lasting connection with Vishnu, as the Padma Purana, another ancient Hindi text, writes that the amalaki tree is the embodiment of Vishnu. To this day, the leaves of the tree are considered sacred and are used in worship of Vishnu.

The amalaki tree itself is also the central figure of the ceremonies in Amlaka Ekadashi, which marks the beginning of the Holi festival in India.3 And this is only one of the festivals in which amalaki plays a central role.

The second creation story takes place shortly after the creation of the world. Two groups were warring over possession of a pot of amrit, the elixir of life, and in their struggles, drops of this elixir were inadvertently sprinkled over the earth. From these drops grew the amalaki tree.4 (Interestingly, some sources also say that guduchi, another remarkable Ayurvedic herb, also sprouted from the fallen amrit.)

This creation story could symbolize amalaki’s ability to aid in longevity, as amalaki’s reputation as a plant that can offer longevity is a common thread through the centuries. One example of this can be found in a Tamil legend, when a king gave to the poet Avvaiyar an amalaki fruit as a way to give her long life.5

The Charaka Samhita, an ancient Sanskrit text, also speaks rather poetically of amalaki’s link to longevity: “while collecting the amla fruit by the light of a full moon, if one were to recite ‘Om,’ then one will live in enjoyment of youth for as many thousands of years as the number one eats.”6

Whether you view these examples as true or simply as entertaining stories, the underlying message is the same—that amalaki has inspired generation after generation, so much so that its creation has been forever tied to both divine influence and the elixir of life, and these touches of divinity and immortality grace amalaki in its many appearances throughout not only the ancient texts but also current ceremonies. 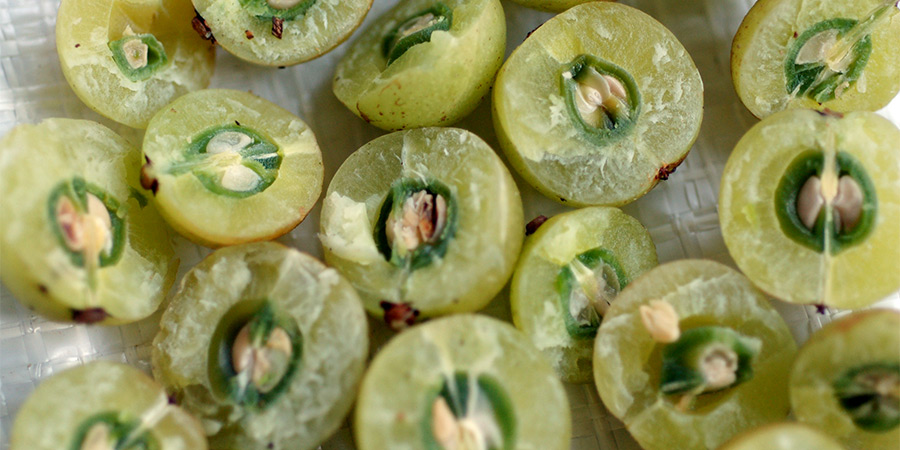 The Nurse Mother in Action: the Benefits of Amalaki

This connection with divinity and longevity permeates amalaki’s Ayurvedic properties as well. It is recognized as an amazing rasayana, or rejuvenative, to the entire system. Among other outcomes, rejuvenation can aid in youthfulness and a healthy, strong immune system. Rejuvenation is a vital concept in Ayurveda, and substances that can nourish and tonify certain organs, let alone the whole self—like amalaki—have a place of honor in Ayurvedic herbology.

Amalaki is commonly known to contain noteworthy levels of vitamin C—there are many studies on various sources of amalaki, and depending on the study, it has been found to have 10 to 20 times more vitamin C than an orange! At any rate, whether it is 10 times or 20 times more, with this much vitamin C, it’s no surprise that amalaki can be very supportive for strengthening the immune system.7

In addition to its renowned rejuvenating properties, amalaki is gently detoxifying. This makes quite the dynamic duo: for a substance to gently detoxify, then to nourish and tonify the whole body, makes amalaki a true wonder-fruit. Like the ultimate nurse it is, amalaki helps every stage of the detoxification process, from supporting healthy, strong agni (digestive fire), to cleansing and protecting the liver, to proper elimination of wastes.

Amalaki is also sattvic. Sattva is the principle that gives light, clarity, perception, intelligence, equilibrium, even insight and wisdom. A sattvic herb infuses the person with these qualities. (Yes, please!) Like a delightful side effect, this leads to amalaki’s marked ability to nourish and tonify the mind.8

Interestingly, amalaki’s sattvic effect and the way it raises consciousness and overall well-being is a prabhava—an inexplicable fact of amalaki that cannot be explained by amalaki’s measurable properties. And, amalaki enhances ojas. Among other qualities, ojas is linked to the immune system. More ojas means a healthier immune system. But that’s not all: more ojas also means more strength, vitality, joy, and “juiciness” in life.

As an added bonus, amalaki’s cooling virya (temperature) helps remove any excess, accumulated pitta. Somehow, it does this without weakening agni. How it does this is a bit of a mystery—another prabhava.

To top it all off, amalaki is balancing to all the doshas, not just to those who may have some excess pitta. Perhaps this can be explained in part thanks to its rasa (taste), as it has five of the six tastes (all except for salty), lending to amalaki’s well-rounded energies.

How does amalaki do all this? We have a hard time making sense of how amalaki can accomplish such an exhaustive list, but that’s okay. We don’t need to fully understand how amalaki does this. We just have to enjoy the benefits. 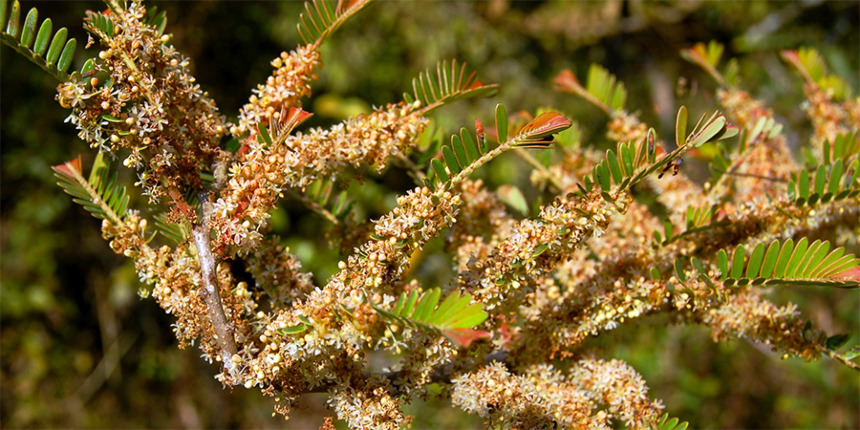 How to Use Amalaki

Amalaki’s long history of use means there are plenty of ways to incorporate amalaki into your daily routine—in fact, the list of uses for amalaki is so long that we could write for pages about how it is used in Ayurvedic herbalism. As much as we would enjoy doing this, to save time, we’ll cover just a couple of the most beloved ways to use amalaki.

Of course, amalaki does well all on its own. You can add the powder to some warm water and drink it like a tea, or you can take Amalaki tablets or the Amalaki liquid extract.

Another option to consider is triphala. This is a traditional formula of three fruits (amalaki, haritaki, and bibhitaki) that supports a healthy digestive tract and daily gentle detoxification. It’s a balanced, tridoshic blend that is deeply nourishing, cleansing, and detoxifying, making it a great daily go-to.

Then there’s Chyavanprash, that most delectable of Ayurvedic herbal jams. As the key fruit, amalaki sets the tone and purpose of this formula. After all we have shared about amalaki, it may not surprise you to learn that Chyavanprash is THE formula for rejuvenation and support of the immune system.

And it certainly helps that Chyavanprash is incredibly tasty. You can add it to warm milk, spread it on toast, or simply eat it right off the spoon straight out of the jar. (We at Banyan love Chyavanprash, and if you were to pay us a visit, you would find jars sprinkled throughout our office, on our desks, in our kitchen—anywhere we can put it so it is within arm’s reach!)

While we can’t quite make sense of amalaki’s many powers, after looking at all that it does we aren’t surprised that it has been chronicled for millennia in many ancient texts and legends. Amalaki definitely lives up to its name of the nurse mother, offering gentle yet effective support for overall health and well-being for all constitutions.

How will you choose to welcome amalaki into your daily routine? Whether you take it on its own or you turn to one of our formulas—or you experiment and create your own formula—you will be welcoming in ultimate balance, sattvic energy, enhanced ojas, and—who knows?!—maybe even immortality. And on that note, we’re off to eat some more Chyavanprash.

The Benefits of Amalaki
More For You
Haritaki: Getting to Know Your Herbal Allies

Haritaki (Terminalia chebula) a powerful herb, perhaps best known as one of the “Three Musketeers” of triphala powder, the most popular formula in Ayurveda.

Triphala is one of Ayurveda's most popular herbal formulas. While it is best known to support healthy digestion, it can also promote vitality, beauty, and more.