An Ayurvedic Guide to Stress Management

Adaptation. Without this remarkable quality, life as we know it would not exist. It is only through the ability to adapt that humans, plants, and animals have evolved to their modern-day capacity.

There is a fascinating concept at play here, and that is the fact that plants have actually helped us to adapt to our changing environments and circumstances. Plants have helped us cope—and adjust—with the stressors in our lives. These types of plants have come to be known as adaptogens.

What Are Adaptogenic Herbs?

What are adaptogens? While these plants have been around and in use for thousands, if not millions of years, it wasn’t until the mid-20th century that a Russian scientist first proposed the term adaptogens.1 Today, an adaptogen can be defined as an agent that:

In other words, adaptogens help to modify the body’s reaction to stress, both environmental and internal. One way they do this is by strengthening and supporting the immune, nervous, and glandular systems.3

There is a compelling fact about adaptogenic plants—they themselves often live in stressful conditions and have their own adaptation strengths and abilities, which they impart to us. For example, ashwagandha, a popular adaptogen in Ayurveda, is highly drought resistant and flourishes in arid conditions and soil of poor quality, conditions in which most plants would suffer from severe stress.4

It cannot be overstated that for millennia humans have depended upon plants as both food and medicine. Since their inception, both Chinese medicine and Ayurveda have relied on herbal remedies for healing and rejuvenation. However, in the West, much of plants’ wisdom and efficacy has been limited or even relegated to folklore, indigenous communities, and countries outside of the United States.

This was also true in the world of research. Until recently, much of the research on adaptogens was largely confined to Asian countries and received little interest (if any) from the West. Luckily, we’re seeing this change as adaptogenic herbs become more widely known and used across the globe.

In Medical Herbalism, David Hoffman notes that the science around adaptogenic mechanisms supports their relationship to the “pituitary-adrenal gland axis” and that “their ability to ‘smooth out’ the body’s stress response may be related to adaptogen’s effects on glucose metabolism…[however] the specific mechanism of adaptogenic activity has not yet been elucidated.”5 We may be able to surmise that by supporting the adrenal glands, which support the regulation of stress hormones, including cortisol.

As noted on Healthline, new research is looking at how these wonder-herbs may be helpful in supporting a wide spectrum of our health, including the respiratory system and the heart.6

Another important aspect of adaptogens, as their name connotes, is their ability to adjust to a body’s needs, bringing the body back into balance “no matter what the direction of imbalance."7 Ashwagandha is a great example of this phenomenon as it has the ability to both increase energy and vitality while also helping to calm the mind and induce sleep.8 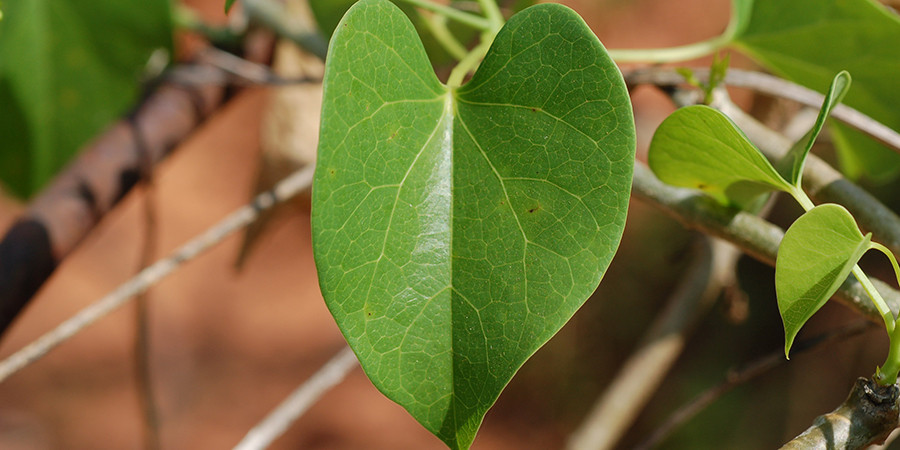 Here are some well-known Ayurvedic adaptogens and a few of their effects on the body:

Amalaki (Embelica officinalis), also commonly called amla, is known as “mother” or “nurse” in Sanskrit. It is known to be a super antioxidant and tonic for general debility and weakness. It pacifies sadhaka pitta, thus influencing clarity and calmness of mind. It is a rejuvenative as well as an adaptogen that is said to slow the aging process, increase virility, and promote immune function.9

Ashwagandha (Withania somnifera) is also known as “Indian ginseng,” though it is not related to the ginseng family and most likely gets this name in reference to its energy promoting qualities.10 Somnifera is translated as “sleep-inducing,” reflecting its relaxing and calming properties that bring us energy by supporting deeper rest.

Bacopa (Bacopa monnieri) is used to aid in recovery from exhaustion, stress, and debility with aggravation of vata. It is often paired with brahmi/gotu kola as a mighty duo in supporting cognitive function, including memory and concentration. It eases tension and helps induce restful sleep.11

In the mind, brahmi (Centella asiatica) improves concentration, intelligence, memory, and alertness. In the body, brahmi nourishes majja dhatu, supporting the brain and nervous system, and helping the body cope with stress.12

Guduchi (Tinosporia cordifolia) is fondly called “the one who protects the body.” It benefits all conditions of aggravated ranjaka pitta and pitta in the blood. It helps to clear pitta toxins and uric acid, boosting the immune system. It is calming to vata and the nervous system in general.13

Licorice (Glycyrrhiza glabra) benefits all seven tissue layers, or dhatus. It is calming and cooling for pitta while also nourishing for vata and majja dhatu. Licorice has a special affinity for the lungs and mucous membranes. It acts as a strong adrenal tonic, thus supporting the body’s stress response, and its sattvic nature is calming to the mind.14

Moringa (Moringa oleifera), largely due to its impressive nutrient content, is helpful for sleep, the heart, kidneys, liver, blood, and the pancreas. Moringa supports healthy energy levels and restoration of the body’s tissues. For more information on moringa’s nutrient content and health benefits, take a peek at Moringa Oleifera—A Superfood for All Ages.15

As a natural source of L-dopa, a precursor to dopamine, mucuna (Mucuna pruriens) has a special affinity for the nervous system. Also known as kapikacchu, this herb is both strengthening and calming, and it is considered one of the best tonics for the reproductive system, both male and female.16

Tulsi (Ocimum sanctum) is so highly revered that it has been referred to as “a goddess incarnated in plant form.”17 Tulsi is said to increase prana, or life force. It is stimulating for the digestion and good for vata in the digestive process. Tulsi is beneficial for all three doshas, with a special affinity for the lungs and rasa dhatu.18 Research has found that tulsi helps to protect organs and tissues against physical stress, among other benefits.19

Technically not an herb, shilajit is an adaptogenic mineral pitch found in the arduous conditions of the Himalayas. Its high mineral content makes it beneficial for many of the body’s tissues, especially the kidneys and the urinary and reproductive systems.21 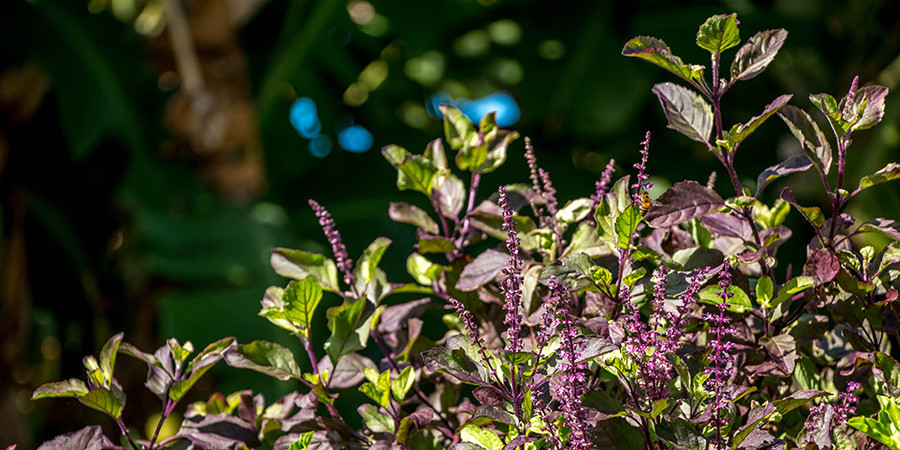 How to Take Adaptogens

Traditionally, bulk herbs are taken as a tea. Most herbs have a synergistic effect when taken with other herbs and thus are usually taken in tandem. However, steeping herbs first thing in the morning does not fit into everyone’s routine. With this in mind, Banyan conveniently offers many of our single herbs in tablet form and also as liquid extracts. Some of the adaptogens offered as both a tablet and liquid extract include amalaki, ashwagandha, brahmi/gotu kola, mucuna, shatavari, and tulsi.

Banyan Botanicals has listened to Ayurvedic wisdom and the science of adaptogens to create some truly supportive adaptogenic blends. Here are a few of our favorites:

Chyavanprash is a traditional Ayurvedic rejuvenative jam. Some of its herbal adaptogens include amalaki, ashwagandha, and guduchi. Along with other warming and nourishing herbs, this formula is known for its energizing and immune-boosting effects.

7-Herb Energy liquid extract is a natural and caffeine-free blend of adaptogens including ashwagandha, Asian ginseng, eleuthero, brahmi/gotu kola, and licorice. All of these offer stress relief and act as a pure, herbal pick-me-up.

Stress Ease, as its name imparts, is specially formulated to aid in times of elevated stress. Drawing from the strength of several essential adaptogens, this blend offers reinforcement to both the body and the mind.

We also created Adrenal Nourish, a formula packed with adaptogens to help the body cope with stress and maintain balanced energy while it also supports the optimal function of the adrenals and nourishes the whole endocrine system.

You can also enjoy our Tulsi Fields tea, which combines the amazing and uplifting qualities of tulsi leaves from our Banyan Botanicals Farm in Southern Oregon with the popular digestive blend of CCF (cumin, coriander, and fennel).

In One Earth Herbal Sourcebook, Dr. Tillotson classifies herbs that score high in terms of both safety and effectiveness for general daily use as “gold standard” herbs. He states that few herbs actually meet this “highest” standard.22 Some adaptogens that are given a gold standard include amalaki, ashwagandha, brahmi/gotu kola, and guduchi.

While most herbs are generally recognized as safe, they may also come with their own limitations. Diuretic herbs, for example, need to be taken with care. We always recommend working with a trained professional or at least doing some preliminary research before starting a new herbal routine.

Keep in mind that although an herb may be considered safe, it does not necessarily mean that it is the right herb for you. There are also health conditions and certain phases of life, such as pregnancy, that need to be taken into consideration when choosing an herbal protocol.

Get to know these wonderful adaptogenic herbs of Ayurveda and start incorporating them into your life as feels appropriate. Notice the help they provide and make adjustments along the way. For more information about choosing the right herbs for you and developing a relationship with these traditional plants, we suggest reading more about Taking Your Herbs.

When you reach the point of adrenal fatigue, the stress you’ve experienced has been so great for so long that your body can no longer recover. Along with getting proper rest and food intake, one of the best and often easiest ways to provide support is through adaptogenic herbs. Adaptogens assist in our body’s management of metabolic systems during stressful times.

Ashwagandha is one of the most revered herbs in Ayurveda. Maximizing the body's ability to resist stress, it enables the body to sustain energy throughout the day while promoting sound, restful sleep at night.

1 Liao, Lian-Ying, et al. “A Preliminary Review of Studies on Adaptogens: Comparison of Their Bioactivity in TCM with That of Ginseng-like Herbs Used Worldwide.” Chinese Medicine, BioMed Central, 16 Nov. 2018, www.ncbi.nlm.nih.gov.

7 Tillotson, The One Earth Herbal Sourcebook, 89.

22 Tillotson, The One Earth Herbal Sourcebook, 89.