The Benefits of Triphala

A Balancing Formula for Detoxification and Rejuvenation*
Updated 2021
Recommended

Also known as “triphala churna,” it is one of the most popular formulas in Ayurveda and has many health benefits for all three of Ayurveda's dosha constitutions. Take the free dosha quiz to learn your constitution and state of imbalance.

Triphala is most commonly known for its use as a gentle bowel tonic, being helpful in digestion, and supporting regular bowel movements. The combination of the three fruits has a synergistic effect to bolster many other systems as well.

In addition to the GI tract, Ayurveda uses triphala churna to support healthy respiratory, cardiovascular, urinary, reproductive, and nervous systems.1 Triphala has also been shown to be a powerful antioxidant, protecting cells from the damaging effects of free radicals.2, 3

The three fruits involved in making triphala are also known for their individual effects:1

In conditions of excess weight, triphala can be used as part of a weight loss program that includes a healthy diet and exercise. Proper digestion and elimination are important factors in achieving long-term success in maintaining an optimal body weight. 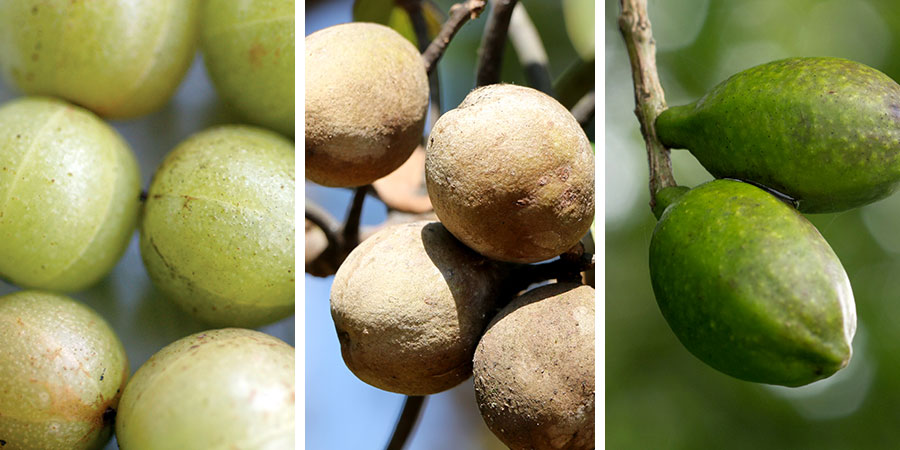 Triphala is recommended and used more often than any other formulation made with Ayurvedic herbs. It is popular for its unique ability to gently cleanse and detoxify the system while simultaneously replenishing and nourishing it.

In Ayurvedic terms, triphala, used in moderation, is said to have a beneficial effect on all three doshas—vata, pitta, and kapha. It is most well-known for its gentle effects on the bowels, improving peristalsis and cleansing toxic build up of wastes; but Ayurveda also views triphala as a nourishing supplement known for its ability to rejuvenate healthy tissues, allowing one to age gracefully.

How to Take Triphala

The traditional way of ingesting triphala is as a tea. This method allows one to taste the herb fully, and taste is considered by Ayurveda to be an important part of the healing process. Taste starts the digestive process, and sends signals to the body as to what to expect, already initiating your body’s own inner pharmacy.

To take triphala as a tea, make a decoction by adding 1/2 teaspoon of triphala powder to a cup of hot water. Stir and allow the tea to cool, and drink.

Triphala churna contains five of the six tastes recognized in Ayurveda (sweet, sour, bitter, pungent, and astringent), only missing the salty taste. Perhaps because the Western diet is so lacking in bitter and astringent, these are the two most prominent tastes for most people, which can make drinking the tea somewhat unpleasant initially. Over time, as the system becomes more balanced, it is not uncommon for the taste one perceives to evolve into a sweet experience.

Triphala is usually taken on an empty stomach, most commonly in the evening before bed. Some prefer to take it first thing in the morning, especially if taking it at bedtime makes one urinate at night.

A common amount to take would be two tablets (1000 mgs) before bed or upon rising in the morning. This can be a more convenient method, especially for those that travel a lot, have a shortage of time, or do not like the taste of triphala tea.

Many Ayurvedic practitioners prefer to give their patients triphala tablets instead of triphala capsules as there is still some mild tasting of the herbs that occurs, sending signals to the digestive system, as explained above in the Triphala Tea section.

Triphala liquid extract provides an alternative method of taking triphala. It's convenient, easy to assimilate, and has a long shelf life. This extract is made from the same certified organic fruits used in making the herbal tablets and is extracted using non-GMO, gluten-free grain alcohol.

A typical dose is a dropper full (about 30 drops) taken in 1–2 ounces of water or juice, one to three times daily, or as directed by your healthcare practitioner.

Triphala has also been shown to have powerful antioxidant effects, protecting cells from the damage of free radicals.2, 3 The result is thought to be largely related to the vitamin C content frequently contained in amalaki,7, 9, 10, 14 which some sources believe to be one of the highest concentrations of vitamin C in any food.1

Other research shows that the vitamin C may have been misidentified, and the antioxidant effect may be attributed to the tannins/polyphenols unique to the herbs used in making triphala.3, 10 Regardless, it has been shown to produce an antioxidant effect, and in accord with Ayurvedic principles, this is related to the synergistic/holistic effects of the components of all three fruits.

For more information and links to articles on modern research, you can find multiple resources online. Two such sources include:

Triphala is a natural detoxifying formula. As part of the cleansing process, it is not uncommon for toxins to be released from the deeper tissues and enter the bloodstream on their way to being ushered out of the body. When many toxins are released at once it can prompt a “healing crisis.” For some people, this can manifest as a headache, a rash, or nausea, in addition to gas, upset stomach, and diarrhea.

Since triphala supports healthy elimination, it is not uncommon to experience looser motions than usual. All of these reactions can be byproducts of cleansing. If your cleansing experience becomes too intense, you can stop taking triphala until the symptoms subside and restart using less, or simply reduce the amount you are ingesting. If the symptoms recur, it is best to stop use and consult a practitioner.

Contraindications can include diarrhea, dysentery, and if you are pregnant or nursing. There are no known drug interactions with the herbs that make up triphala.1, 6 Some studies do report findings that would advise caution in people taking blood-thinning medicines,7, 8 as triphala may affect platelet function.

From an Ayurvedic perspective, if your stools are dry and hard, consider using haritaki in place of triphala.

Triphala is most commonly purchased as a bulk powder, tablet, or liquid extract.

The advantage of buying it in bulk is that it is significantly cheaper on a per-use basis and it allows one to take the herbs in the most traditional way—as a tea.

Tablets are considered by many to be a quicker, more convenient method of taking the herbs along with providing the option of not having to taste the herbs. Many Ayurvedic practitioners feel that their clients are more likely to take the herbs if they are provided in tablet form.

When choosing a supplier of triphala, there are a variety of questions to consider relating to the quality of the herbs, the values of the company, and the price you pay.

Is the supplier able to trace the herbs back to the field they were grown in?

Traceability of the herbs from field to shelf allows the supplier to know where and how the herbs were grown and when they were harvested.

Are the fruits grown in optimal locations?

Location does play a role in quality. Like the grapes in wine, herbs tend to vary in quality and taste depending on the conditions they are grown in. Banyan sources our triphala ingredients from areas where the fruit trees thrive naturally.

Are the fruits sustainably harvested?

The three fruits that combine to make triphala grow on large trees and are relatively abundant in many parts of India. Where and how the fruits are harvested makes a big difference in sustainability. They can be harvested on private farms where sustainability can be managed, or they may be wild-harvested from the forest legally, and sometimes they are taken illegally, threatening long-term sustainability.

To ensure sustainability, Banyan sources amalaki, bibhitaki, and haritaki that have been cultivated on privately owned farms.

Are the farmers looked after for their labor?

Harvesting and processing the fruits in triphala is labor-intensive. It includes the picking of the fruits by highly skilled tree climbers, washing, drying, and removing the pits.

Banyan strongly believes in maintaining socially responsible relationships with our farmers. We are committed to following fair trade principles, which include paying above-market wages and making investments in educating the farmers, and giving back to their communities.

Are the fruits organic?

As Banyan sources from private farms, it is able to ensure that organic farming methods are followed, and you can therefore rest assured that your herbs have not been treated with pesticides or other harmful chemicals.

The fruit contained in our triphala is grown exclusively on certified organic farms. The fresh, ripe fruit is harvested at the optimal time using environmentally sustainable methods that are sensitive to the long-term health of the trees and their surrounding ecosystems.

Achieving Your Healthy Weight
More For You
The Importance of Healthy Digestion
Gain a deeper understanding and appreciation of the role digestion (agni) plays in your overall health, and learn practical tools to keep your digestion strong.
Amalaki: Getting to Know Your Herbal Allies

Amalaki, also known as amla, is the perfect herb to welcome into practically everyone’s daily routines. Read this article to learn how it can be a true lifelong herbal ally.

11 Dick, Michael. Some Words about Triphala.

13 Tierra, Michael. The Wonders of Triphala.