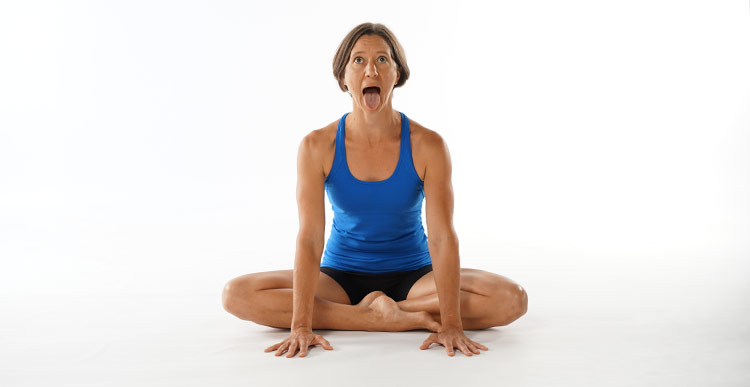 If possible, face the sun. Come onto the hands and knees and bring the ankles and knees together. Gently move the hips back to rest on your heels, as in Thunderbolt (Vajrasana). Place the right hand on the right knee and the left hand on the left knee. (If kneeling is not comfortable for you, sit cross-legged and place your hands on the floor in front of the body rather than on the knees. Then, simply follow the rest of the instructions as they are written).

Spread the fingers wide, like a powerful feline extending retractable claws. Keeping the hands on the knees (or on the floor, if you are sitting cross-legged), straighten the arms and gently arch the back, tilting the pelvic girdle slightly forward and opening the heart center. Lift the chin a couple of inches, open the eyes as wide as possible, and take the gaze upward—either toward the third eye or toward the ceiling above. (If this is not comfortable, you can also gaze at the tip of the nose.)

Inhale through the nose. Then open the mouth wide and extend the tongue out toward the chin as far as you comfortably can. On the exhalation, without any straining whatsoever, release a breathy, “aaaahhhhhh” sound—a quiet “roar.” Close the mouth, inhale through the nose, open the mouth wide, extend the tongue, and once again, release a breathy “roar” on the exhalation. Repeat this roaring cycle at least five, but up to twenty, times. To further stimulate and strengthen the throat, gently move the tongue from side to side as you roar.1

This asana is especially potent when it is practiced outdoors, before the rising sun.2

Pacifies kapha, improves speech, tones the facial muscles, and relieves tension from the chest and diaphragm. Supports health and clarity throughout the respiratory tract, relieving many imbalances of the mouth, throat, nose, eyes, and ears. Encourages a strong and beautiful voice and helps to externalize those who are introverted.3

*There are two distinct poses in yoga that are frequently and often interchangeably referred to as “Lion Pose.” To confuse things further, both of them have multiple variations. The pose described here is sometimes called “Roaring Lion Pose” and is known in Sanskrit as Simhagarjanasana. Simhasana is also known as “Lion Pose” and includes a quiet, meditative variation that does not involve extending the tongue, nor any vocalization.

Full Yogic Breath
More For You
Empty Bowl Meditation
There are many meditation techniques, but Empty Bowl meditation is one that calms the mind, awakens kundalini shakti, and unfolds a blissful state of awareness.
Thunderbolt (Vajrasana)
Good for the knees, digestion and moving energy down (apana vayu).