Shatavari: Getting to Know Your Herbal Allies

An Ayurvedic Approach to a Healthy Cycle

Shatavari (Asparagus racemosus) is a wondrous plant that holds a special place in the heart of the Ayurvedic pharmacopoeia. Thanks to its cooling, soothing, nourishing, and rejuvenating work throughout the body, shatavari effectively balances both pitta and vata. This sattvic herb is fundamental in Ayurveda and can be an ally to most everyone, and no herbal education or Ayurvedic tool kit is complete without it.

Perhaps most famous as a powerful female reproductive tonic, shatavari is equally beneficial to men. And it isn’t limited to the reproductive system—it crosses into other organs and tissue layers, helping to bring overall health and balance throughout the body-mind.

Shatavari is in the wild asparagus family, hence its botanical name Asparagus racemosus. It is a beautiful plant with wispy, graceful stems and branches, thin, needle-like leaves, and delicate flowers.

But it's what is below ground that has captured and held the reverence of Ayurveda for the past few millennia. Shatavari’s herbal power is found in its many creamy colored, thick tuberous roots.

In fact, these roots are the inspiration behind its name—shat meaning “one hundred,” and avar meaning “below,” literally translating as “the plant that has one hundred roots below the ground.”1

Knowing this, it is no wonder that shatavari root is famous for its work in the female reproductive tissue layer. Its cooling, sweet, and unctuous qualities penetrate deeply into the reproductive tissue, promoting fertility, and so much more.4  This makes it an ideal ally for women’s health.

Shatavari can be called upon to support a healthy menstrual cycle, aid in a peaceful transition into menopause, and help support mothers during pregnancy, birthing, and nursing.5 (As always, please first consult your practitioner before incorporating shatavari into your daily routine while you are pregnant or nursing.) 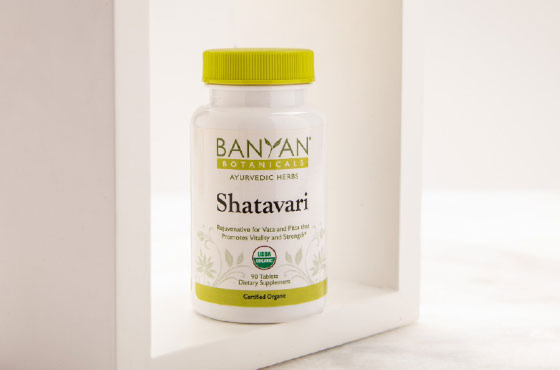 In fact, shatavari has yet another translation, this time with men in mind—it is called “the many-heired,”6  hinting to its ability to support fertility, healthy reproductive fluids, and healthy sperm production.7 Shatavari does especially well when mixed with ashwagandha, kapikacchu, gokshura, and amalaki to address these intentions.

Regardless of gender, shatavari works as an aphrodisiac for everyone. In the world of Ayurveda, an herbal aphrodisiac goes way beyond supporting a healthy sexual appetite (which, shatavari does, for men and women).

According to Ayurveda, by reinvigorating the sexual organs, these substances revitalize the entire body. Within these organs resides the power to create life, and this embodies not only the ability to create a child, but also the capacity to renew one’s own life and vitality—body, mind, and soul.8

Considering shatavari’s ability to reinvigorate the entire person, it holds a significant role in the Ayurvedic apothecary as a rasayana, or rejuvenative herb. Rasayanas nourish and tone the whole body, while also reinforcing the immune system. In Ayurveda, immunity is strongly linked to a substance called ojas. Rasayanas strengthen ojas, thus giving the body strength, vigor, vitality, and overall juiciness of life! 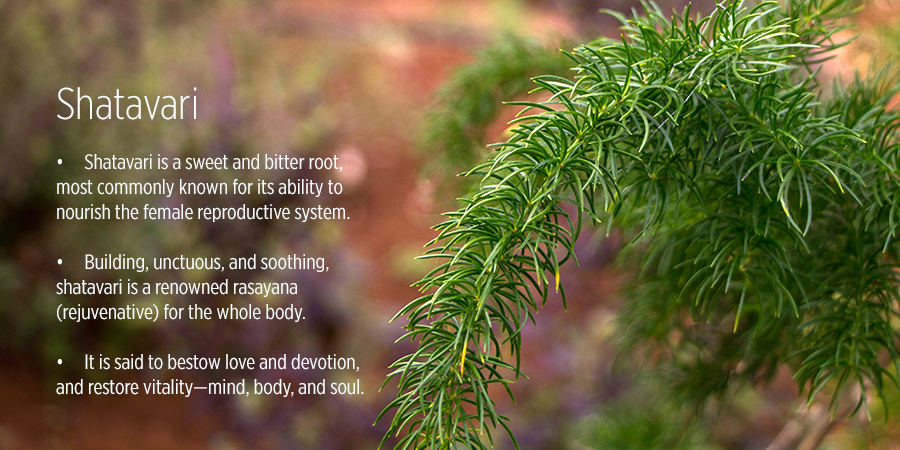 As we have illustrated, shatavari isn’t limited to its work within the reproductive tissue layers. In fact, its cooling, soothing, nourishing, and rejuvenating properties can be called upon to help balance pitta and vata in various organs and tissues.

Are you experiencing excess pitta in the digestive system? Shatavari can cool, soothe, and coat the mucous membranes in the stomach while also aiding the intestine’s ability to respond to excess heat and acidity. A mixture can be made with shatavari, amalaki, manjistha, and kutki to soothe excess pitta in the belly.10

Or perhaps you are experiencing dry and overheated lungs? Shatavari can help with that by increasing moisture and alleviating the excess heat. A formula incorporating shatavari with licorice, vasaka, and a little neem is especially effective to reduce aggravated pitta in the lungs.11

Or maybe you have excess vata in majja dhatu, the sixth tissue layer in the body. Shatavari is there to help yet again, soothing excess vata in the mind and nervous system.12  Through this work in the mind, it is even said to aid in love and devotion.

This is one herb that earns its place in practically everyone’s herbal cupboard!

How to Take Shatavari Root

Incorporating shatavari into your herbal regimen is pretty straightforward. Shatavari can be effective when taken on its own or as part of an herbal formula.

Shatavari’s work within the body-mind is truly inspirational, supporting women and men alike with its deeply nourishing and rejuvenating qualities and its uplifting sattvic energy. This is a dependable herbal ally that has more than earned its reputation in Ayurvedic herbology and is sure to keep its notoriety for years to come.

An Ayurvedic Guide to Breast Health
The breasts and changes in them can indicate potential imbalances. Here, we'll discuss basic breast anatomy, general breast health, and some breast beauty tips.

6 Naveen Patnaik.The Garden of Life: an Introduction to the Healing Plants of India. (Madison: Doubleday, 1993), 48.