The store will not work correctly in the case when cookies are disabled.
Skip to Content
Free Standard Shipping All Weekend Long! No minimum required. Expires Dec. 5th, 2022.
Banyan Blog

Ghee—Everything You Need to Know about Clarified Butter

Who doesn't love a heaping scoop of ghee melted over the top of their rice or kitchari? Yum! If you've ever been lucky enough to experience the rich, nourishing, and luxurious qualities of this golden nectar, you'll understand why ghee is a must-have in every Ayurvedic kitchen. But have you ever wondered why ghee is so highly revered in Ayurveda? We're going to demystify this deliciously healthy fat and cover everything from the history of ghee to its wide array of health benefits and uses.

Ghee is that beautifully golden yellow substance left over after the impurities of butter have been melted away. Also known as clarified butter or anhydrous milk fat, ghee has been used for thousands of years in Ayurveda for cooking and religious ceremonies, as well as therapeutically, both internally and externally.

Ghee is made from butter, but has gone through a clarification process which strips away the parts of butter that are the most difficult to digest, such as lactose, casein, whey proteins, and trace minerals.

While ghee is still technically considered a dairy product, it is the one dairy product that many with lactose-intolerance or other sensitivities (like casein) can and do eat! Most of the water content in the butter is also cooked off. It is often used as a substitute for butter in various recipes, and Banyan’s ghee is free of gluten, sodium, trans fats, and GMOs.

Although ghee does not taste exactly like store-bought butter, it still has a delicious taste and a smooth quality. Some even consider it to be superior and don’t want to return to regular butter after experiencing the taste—and benefits—of ghee!

The ancient seers viewed ghee as more than a food substance. As with all foods, ghee holds a certain energy. Garlic and onions have a heavy, tamasic energy; coffee and chocolate have an active, “can do” or rajasic energy. Ghee, on the other hand, holds a pure or sattvic energy. Sattvic foods are thought to be abundant in prana, the universal life force. They have a harmonious and peaceful nature. Sattvic foods also support physical strength, a strong and pure mind, good health, and longevity.

Because the sattvic energy is so pronounced in ghee, it is often an integral part of religious ceremonies in ancient Vedic customs. It is said that Prajapati, the Lord of Creatures in Hindu mythology, rubbed his hands together and created ghee. He then poured the ghee into the fire, creating his offspring.

Ghee thus symbolizes creation, auspiciousness, nourishment, and healing in its purest and most noble form.

Still today, ghee is offered to Agni, the Hindu God of Fire, during religious rituals. In Sanskrit, ghee is known as ghrta. It is derived from the base, ghr, which means “to shine.” It allows the body and mind to burn with a radiant aura and a refined brilliance, fueling dhi (intelligence), buddhi (intellect), and smrti (memory). Its unctuous quality makes all things soft and malleable, creating supple organs and an adjusting and harmonious mind.

Its detoxifying benefits have made ghee a notable element in cleansing rituals. In fact, ingestion of ghee is a core part of cleansing treatments and panchakarma in Ayurveda. It has been found that many toxins have a lipophilic (fat-like) structure, allowing them to easily mix in with the ghee and move out of the tissues and body. In one striking study, it was found that panchakarma reduced mean levels of polychlorinated biphenyls, a common environmental toxin that is lipophilic, by an alarming 46%!5

How to Make Ghee

Historically, the process of making ghee began with churning butter by hand. Today most commercial butter is made by pushing the cream and protein of milk through a fine mesh screen versus churning the milk. This does create a considerable difference, in that the traditional churning process with which ghee was often made added a stronger quality of digestive fire (agni), which balances the ghee and increases its sattvic energy.

Though hand-churned butter may not be readily available, commercial butter still has similar properties to it. To make ghee, lightly boil a pound of unsalted butter on a stovetop until the milk solids settle to the bottom. Once the milk solids are removed, what remains is a high concentration of fats and other nutrients. In fact, it is said that ghee is 99% fat. Being all fat, it is naturally high in calories, containing 112 calories per 1 tablespoon serving, 12.7 grams of fat, minimal protein, and no carbohydrates, fiber, or sugars. Most of the fat is saturated fat (60-65%)2, with a relatively greater concentration of short and medium chain triglycerides (25%, versus 12-15% in butter)3, which are known to have many health benefits.

With the milk solids removed, most of the calcium is also removed. On the other hand, ghee contains a whopping 108 micrograms of vitamin A (a natural antioxidant) in just one tablespoon! It also contains a considerable amount of butyric acid, a short chain fatty acid, which acts like a natural probiotic (the intestinal bacteria feed off this for energy), supporting digestion and the immune system. 1 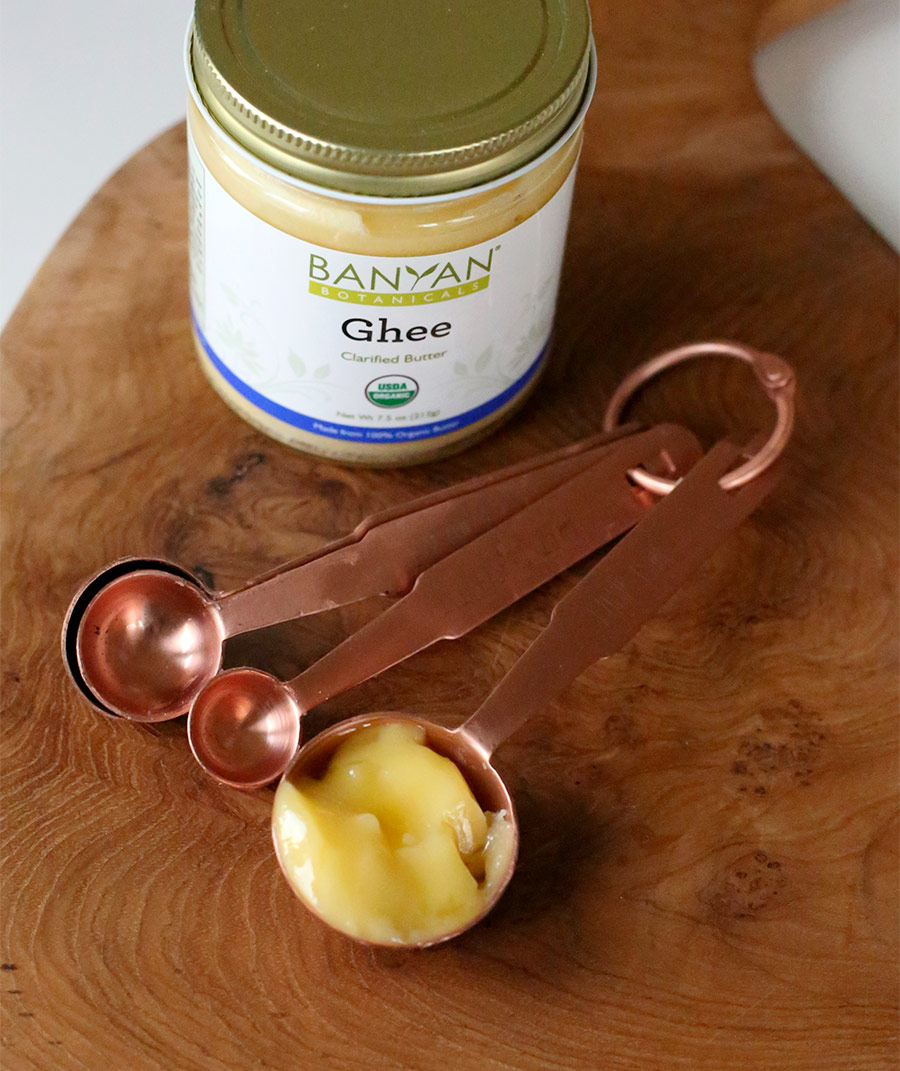 Of course, this is, at the end of the day, a kapha food. As the ancient tradition of Ayurveda says, it is important to make sure you consume only as much as your agni can handle. It is when we eat beyond the capacity of our agni that we run into various health issues, such as heart challenges or weight gain.

If you are wondering where to buy ghee, Banyan offers premium quality ghee here on our site. If you’re feeling adventurous, get the recipe for How to Make Ghee.

Thanks to its penetrating qualities, ghee butter can act as a vehicle to carry substances deep into all seven tissue layers. It is a wonderful anupan (vehicle) for herbs and other medicinal substances, and Ayurvedic practitioners often combine herbs to a base of butter to create a “medicated ghee” with the intention of utilizing ghee’s qualities to bring the herbs deeper into the tissues. Some popular examples of medicated ghee include brahmi ghee and shatavari ghee

To learn more about anupans and how they work, see this resource.

How to Use Ghee

Ghee can be used both internally and externally. Externally, ghee will soothe irritated skin. Internally, it soothes and nourishes the digestive tract and any tissue it is carried to, particularly the reproductive tract.

Banyan’s ghee is made from the milk of organic, grass fed cows in Sonoma, California. The farmers who care for them are award-winning producers of butter and take very good care of the cows who bring us this wonderful, golden nectar of Ayurveda.

We believe that it is of utmost importance to use ghee that comes from organic, grass-fed cows. There is a less expensive type of ghee, derived from vegetable oil and high in trans-fats, that is best avoided. While the above information presented comes from testing done on cow’s ghee, Banyan Botanicals has not tested our ghee as extensively. We are confident, however, in the quality of our ghee because it is derived from organic, grass-fed cows and most of the above listed benefits hold true.

Cultivating Ojas with Ayurveda
More For You
How to Make Ghee
Heat one pound of unsalted organic butter over low heat in a heavy-bottomed pot. During this entire process, do not stir butter at all. The butter will begin to simmer and will make a little crackling noise. After about 15-20 minutes, there will be a thin covering on...
Shatavari Ghee Recipe

5 John Fagan and Robert Herron. “Lipophil-mediated reduction of toxicants in humans: an evaluation of an ayurvedic detoxification procedure.” Alternative Therapies in Health and Medicine. 8, no 5 (September 2002): 40-51