The Benefits of Ashwagandha

Ashwagandha (Withania somnifera) is one of the most revered and prized herbs in the Ayurveda pharmacopoeia. It’s known as the premier Ayurvedic rasayana (or rejuvenative) tonic because of its superior ability to nourish the whole body and mind. Maximizing the body's ability to resist stress, it enables the body to reserve and sustain vital energy throughout the day while promoting sound, restful sleep at night.

Here lies one of the most magnificent benefits of ashwagandha: as an adaptogen, it is not only among Ayurveda's top herbs for energy, but also helps calm the mind. What a helpful herbal ally to have in our modern culture of depleted adrenals and perpetual stress!

Characteristics of the Ashwagandha Plant

Ashwagandha plants are native to India, northern Africa, and the Middle East, but they can now be cultivated in temperate climates around the world, including the United States (it grows abundantly at Banyan Farm in Southern Oregon!).

This perennial shrub grows up to 3 feet tall, and the entire plant is covered in silver-gray, felted hairs. The leaves are oval and about 2 to 6 inches long, and its small, yellow-green, star-shaped flowers grow up to a half inch in any direction. The ashwagandha berry is enclosed inside a papery calyx that serves as protection for the fruit. Although the leaves and berries have therapeutic value, most of the benefits are derived from the stout, fleshy roots of the shrub. 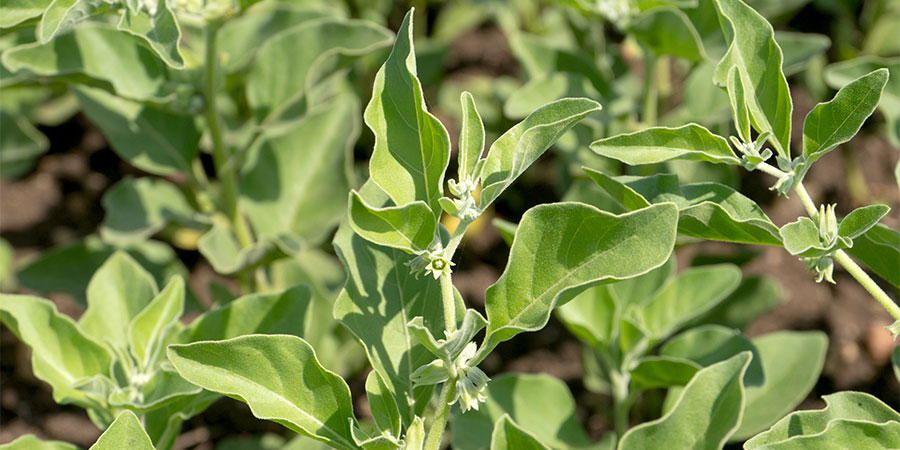 What’s in a Name?

A fun fact about this beloved Ayurvedic herb is that the Sanskrit word “ashwagandha” is translated as “the smell of a horse,” (ashwa—horse, gandha—smell), which refers to its ability to bring you the essence of a horse—strength and stamina—while nourishing the male and female reproductive and nervous systems. 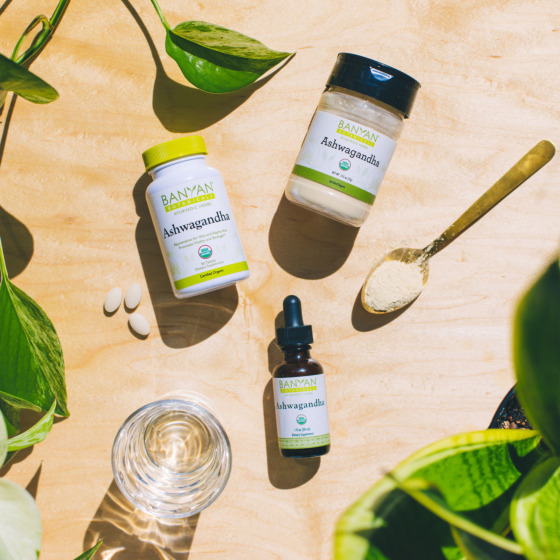 Its botanical name, Withania somnifera, tells us something about this herb; somnifera is translated as “sleep-inducing,” reflecting its relaxing and calming properties that bring us energy by supporting deeper rest.

Ashwagandha has other names as well. It is often called “winter cherry,” which is attributed to its small, red berry fruit that looks like a tiny cherry tomato. Ashwagandha belongs to the Solanaceae, or nightshade, family—the same family as tomatoes and potatoes. Another common name is “Indian ginseng,” though it is not related to the ginseng family and most likely gets this name in reference to its energy promoting qualities.

Interestingly, ashwagandha’s ability to help the body adapt to stress is reflected in the fact that the plant thrives in arid conditions and in poor quality, alkaline soils. While most plants would suffer from severe stress in this environment, ashwagandha flourishes.

All of Banyan’s ashwagandha is grown in an arid region of north Karnataka (Southwest India). Due to the harsh farming environment and the limited choice of crops that can be grown, farmers here are poorer than average, and few can afford to dig wells for irrigation.

Ashwagandha is remarkably drought-resistant, making it the perfect crop choice for areas that are difficult to irrigate. 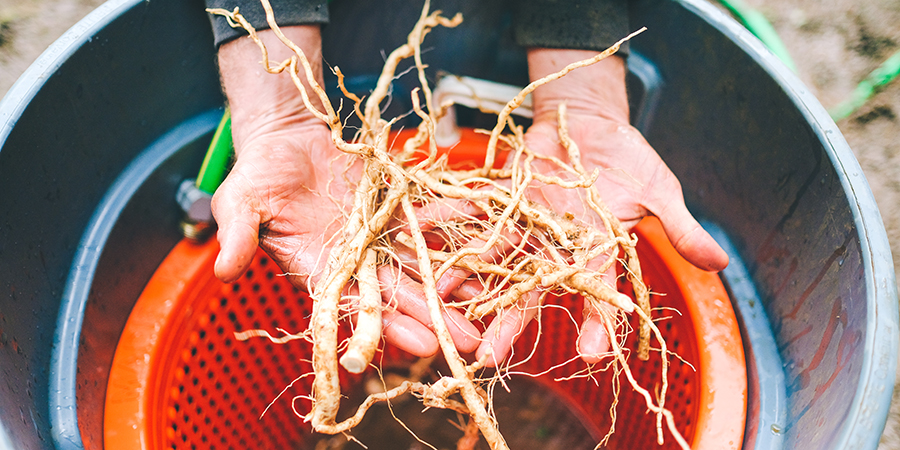 From Seed to Harvest

The way in which herbs are grown on the farm can have a significant influence on the quality and cost of the final product. In the case of ashwagandha, the spacing of the seedlings in the field is a surprisingly important factor.

Seeds are sown in the beginning of the monsoon season and harvested approximately five months later. The distance between the plants, combined with the time of harvest, determines the thickness, shape, and fiber content of the root. If the seedlings are planted too close together, or harvested too early, they will not be well developed, and result in a poor yield. If the seedlings are spaced too far apart, or left in the field for too long, a thicker fibrous root will develop, which causes challenges when attempting to produce a uniform fine powder.

This is just one example of why it’s so important for us to support projects that maintain close relationships with the farmers. Only with regular communication and feedback can our herb suppliers understand and respond to the challenges faced on the farm. And as a result of this dedicated communication, we get correctly spaced out seedlings that produce perfectly powderable ashwagandha.

Learn why ashwagandha is one of the most highly regarded and commonly used adaptogens in the Ayurvedic pharmacopoeia.
Recommended

Ashwagandha is one of the most well-known and widly used Ayurvedic herbs. And for good reason! It is great for so many functions in the body—from sleep, energy, and stress, to rejuvenation, muscle strength, and joint health.

4 Ashwagandha Recipes for Your Adrenals

During times of stress, our adrenal glands could use a little help. Enter ashwagandha!