The store will not work correctly in the case when cookies are disabled.
Skip to Content
Fresh Start Sale! 20% Off Orders Over $60 with Code BEGIN23 | Shop Sale >>
Daily Routine

Oil Pulling 101: How to Oil Pull & the Science Behind It 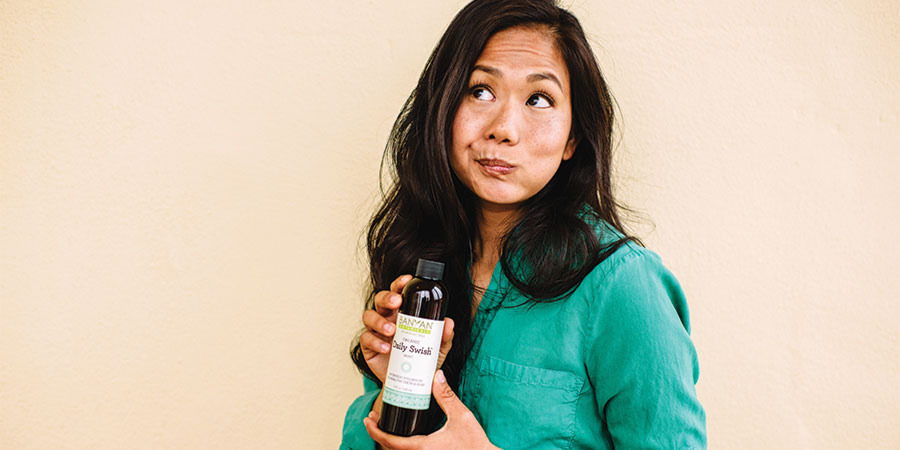 Maybe you’ve heard of an Ayurvedic oil pulling treatment, but you’re not sure what it means or how oil pulling works. Or maybe you’re wondering whether there is any actual benefit to putting oil in your mouth. If so, you've come to the right place to learn about oil pulling and the scientific studies that back much of its effectiveness. 1

Oil pulling is referred to in Ayurvedic texts as kavala or gundusha, and it claims such health benefits as improving oral flora, preventing tooth decay, alleviating bad breath, and strengthening the tissue of teeth and gums.2

In addition to brushing your teeth, flossing, and scraping your tongue, oil pulling with sesame oil, coconut oil, or one of our specially formulated Daily Swish oils is a safe and effective bonus to a healthy oral hygiene routine.

Let us tell you why. 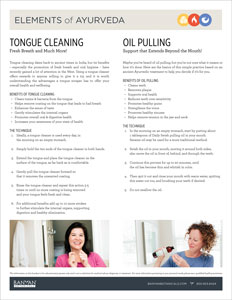 What Is Oil Pulling?

Oil pulling is the act of taking a small amount of oil and swishing it around one’s teeth and gums—not unlike an Ayurvedic mouthwash.

According to traditional methods, kavala was the oral cleansing technique now referred to as oil pulling, where a comfortable amount of oil is held in the mouth and gargled or pulled through the teeth and around the tongue and gums.3

Gundusha involves completely filling the mouth with oil and holding it, rather than swishing or gargling. Both methods provide health benefits beyond a clean mouth, including strengthening the oral cavity muscles and jaws and promoting overall health.4

How Does Oil Pulling Work?

Both Western medicine and Ayurveda use the tongue as an important diagnostic tool, indicating the fact that a healthy mouth and a healthy tongue is interrelated to the health of the entire body.5 Thus, supporting our oral hygiene is a benefit for our general health.

In fact, our mouths are host to over 600 different species of bacteria which populate the teeth, tongue, soft tissue of the cheeks and palates, and our tonsils. The oral cavity further adjoins the esophagus, nasal passages, sinuses, and the intricate ear cavities.6 You can see why bacteria in the mouth is a big deal!

Many of these bacteria are necessary for a healthy oral microbiome, and many of them, such as Streptococcus mutans, can cause problems if left unchecked—tooth decay, bad breath, gingivitis, and strep throat, to name a few.

Bacteria are single-celled organisms, enclosed by a lipid membrane. These bacteria are attracted to the lipid structure of the oil, pulled from the oral tissue by adhering to the fat molecules of the oil, then flushed away through the act of oil pulling and spitting out the oil.7 Voila!

Oil pulling is a time-tested method for improving oral hygiene that is endorsed not only by Ayurvedic practitioners, but Western doctors, scientists, and dentists too.8

How to Do Oil Pulling

Here are a few simple instructions for how to do oil pulling. Oil pulling is best incorporated in the morning, upon rising, and on an empty stomach, as it helps to stimulate the appetite and enhance the sense of taste.

Some suggest swishing before brushing, while others suggest brushing before swishing. Dr. Mark Burhenne, from Ask the Dentist, says, “If you brush after you pull, you’ll actually get rid of the good bacteria you just worked to support.”9 With this in mind, brushing then swishing may be best. 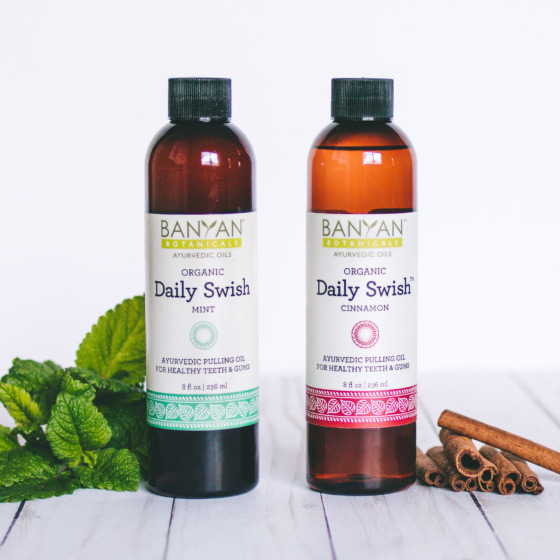 What Is the Best Oil for Oil Pulling?

Traditionally, oil pulling was done with sesame oil, known as “The King of Oils” due to its rich nutrient value and versatility.

Oil pulling with coconut oil has also gained popularity because of the antimicrobial benefits of its lauric acid content.10

Banyan’s Daily Swish was created specifically to enhance the experience of oil pulling. Crafted according to Ayurvedic protocols, it combines sesame and coconut oils with the additional advantage of Ayurvedic herbs like guduchi and fennel.

Daily Swish also features the three fruits that comprise the popular Ayurvedic formula triphala. Best known as a digestive supplement, triphala also has a long history of use in Ayurveda for promoting oral hygiene, which has been backed by scientific studies as well.11 For instance, triphala powder has been clinically shown to be an effective mouthwash for supporting healthy teeth and gums and reducing plaque.12 13

“This is really the best oil for pulling! I’ve always used plain coconut oil until I was given a sample of this product and it got me hooked. It’s especially good for anyone with excess pitta.”— Meredith, Daily Swish Customer

“I look forward to getting up in the morning and starting my day with Daily Swish. It has improved my oral health a lot. My teeth, gums, and breath are in a healthy state. It is a game-changer.”— Deepak, Banyan customer

“My dentist was very impressed with the condition of my teeth after using [Daily Swish].”— Banyan customer

“I love [Daily Swish] so much I am going to buy the larger quantity next time. It has become a staple of my morning routine and leaves my mouth feeling fresh and vibrant.”— Banyan customer

The Benefits of Oil Pulling

There are numerous causes for bad breath, or halitosis. One of these causes is actually the byproduct of bacteria.14 There are lots of places for bacteria to hide in our oral cavity! Tongue scraping is also said to eliminate much of these bacteria and the source for the malodor.

In one placebo-controlled study, the efficacy of oil pulling was compared to that of chlorhexidine, a common antimicrobial mouthwash, to reduce halitosis. When compared to those of the placebo, results of the sesame oil and chlorhexidine showed similar scores in the reduction of bacteria and volatile sulfur compounds.15

To reiterate, a healthy oral microbiome plays a leading role in healthy teeth and gums.

One of the bacteria found in the oral cavity, Streptococcus mutans (S. mutans) is also one of the main contributors to tooth decay. In another controlled study, a sesame oil pulling group was again compared with a chlorhexidine group to evaluate the presence of S. mutans count after ten minutes of swishing for a two-week period.

There was a significant reduction in the S. mutans count after 1 and 2 weeks of oil pulling, corresponding to the results of the chlorhexidine group.16

While this is one area where clinical studies are limited, there is some anecdotal evidence that oil pulling benefits sinus health. Given the relationship to the oral cavity, it stands to reason that maintaining healthy bacteria in the mouth would influence surrounding tissues.

Oil pulling is also said to increase circulation of the oral tissues, perhaps bringing nutrients and lymph to the sinus tissue as well.17

There is more and more awareness of the connection between oral health and our general well-being. Furthermore, there are serious health conditions that may be linked to the bacteria in our mouths, such as endocarditis, cardiovascular disease, and even complications with pregnancy and birth.18

Both oil pulling and tongue scraping are easy and excellent ways to assist with the body’s detoxification process.

The practice of oil pulling is a wonderful addition to brushing and flossing your teeth! The ritualistic aspect of it is not only beneficial for oral hygiene but also for adding a sense of consistency and balance to your daily life.

With all of its benefits for the teeth, gums, and beyond, it’s no wonder that oil pulling has been practiced for thousands of years! For more information on measures you can take to practice Ayurvedic oral and dental care, be sure to read our Ayurvedic Guide to Oral Health.

What You Need to Know About Oil Pulling & Our Daily Swish Oil
More For You
The Importance of Oral Health
Ayurveda has a great deal to say about oral health and hygiene. Here's why many people are turning to Ayurveda to support their teeth, gums, and overall health.
How to Overcome Decision Fatigue with Daily Routine

Studies show that people who practice a daily routine make healthier life choices and experience less decision fatigue. Read this article to learn more about how to get started on a healthy daily routine and approach life's decisions with a clear and focused mind.

14 “Volatile Sulfur Compounds as The Cause of Bad Breath: A Review.” Taylor & Francis. Accessed April 18, 2019. https://www.tandfonline.com