The store will not work correctly in the case when cookies are disabled.
Skip to Content
Herbs

Neem oil has been recognized to possess powerful medicinal properties for more than 2,000 years. Its use originated in ancient India and neighboring countries, where the Neem tree (Azadirachta indica) was deeply revered as one of the most versatile medicinal plants known.1 In fact, neem has been used extensively not only in Ayurveda, but also in the medicinal traditions of Unani and Homeopathy.2

Even today, the neem tree is esteemed as the “Village Dispensary”—every part of it known to possess unique therapeutic value.1 In very general terms, neem is known to have an affinity for the reproductive system, the GI tract, the respiratory system, and the circulatory system.3 Neem oil, specifically, is often recommended for its ability to boost and support natural immunity—particularly in the skin, nails, hair, and scalp. Neem oil also supports natural cleansing of the channels in the body and supports the rejuvenation of healthy tissues.4 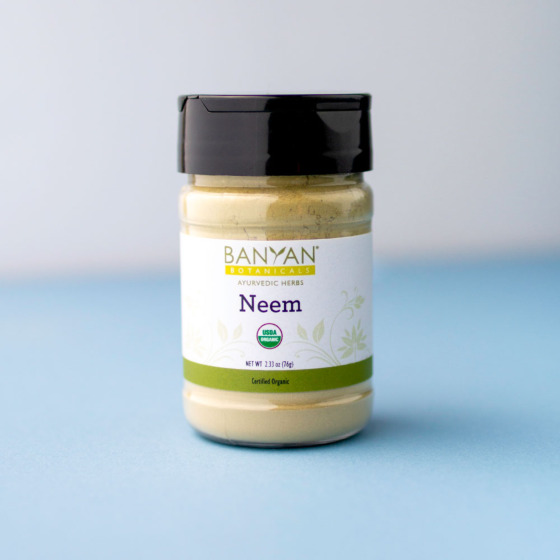 It is very important to understand that there are two distinct types of neem oil available. The first is a potent and distinctly strong smelling vegetable oil—the pure extract of neem fruits and/or seeds—that while effective in certain applications, can be harmful if not used correctly.5 The second is a more traditional herbal preparation containing neem leaves, a base oil, and water (which is cooked off in the preparation process).

Neem is quite bitter in taste, which gives it a powerful cooling effect. Neem oil is one of the most cooling herbal oils used in Ayurveda. This cooling principle, combined with its capacity to support healthy blood, makes it most balancing to pitta—particularly when associated with heat in rakta dhatu (the blood).3 Excess pitta can manifest in a number of ways; one prominent location is the skin.6

One of the Sanskrit names for neem, “Arishtha,” bears the meaning “reliever of sickness” and is indicative of the reverence inspired by this widely used medicinal plant.1 In fact, neem is often seen as a promoter of general health.1 In Ayurveda, neem typically balances excess pitta and kapha. (If you are looking to remove excess pitta and kapha, support your colon and bowel movements with rejuvenating herbs like Triphala.) Neem’s cold, light, and dry qualities tend to aggravate vata. Neem oil has traditionally been applied to the skin as a means of soothing and lubricating the skin, calming irritated and heated sensations, maintaining comfortable body temperature, supporting the skin’s natural immunity.3 It is often applied to the hair and scalp to promote luster and overall health, or to the palms of the hands and soles of the feet to support appropriate perspiration in these locations. Neem oil can also be used as a deodorant for malodorous sweat.3 It is likewise recommended for the maintenance of healthy teeth and gums as well as overall oral hygiene.3 Further, neem oil also has numerous applications as a deterrent against mosquitoes and other insects.3 In this capacity, neem oil can help protect individuals from insect bites.

How to Use Neem Oil

Neem oil is most often used topically. Because Banyan’s neem oil is a traditional preparation and not a pure extract, it can be applied directly to the skin, scalp, hair, nails, teeth, and gums.

For Use on Skin and Nails:

Simply apply the oil to the concerned area and either cover it loosely with a bandage, old clothing, or let it breathe and absorb uncovered.

For Use on Hair and Scalp:

Massage the oil directly into the roots of the hair and scalp, either before bed or fifteen to thirty minutes before bathing.

For Use in Oral Hygiene:

Swish and/or gargle with the oil in the mouth for thirty to sixty seconds and spit. Or apply it directly to the teeth or gums.

Modern scientists have described medicinal uses for all parts of the neem tree—especially the leaves.2 Astonishingly, more than 140 compounds have been isolated from various parts of the neem tree and many have been evaluated for therapeutic use.2 Numerous studies have affirmed a wide range of medicinal applications for neem and while these broad strokes are beyond the scope of this article, we will highlight a few studies that most directly relate to the use of neem oil. Isolated compounds from neem have been shown to support joints and the immune system.1 Clinical studies using dried neem leaf extracts, lotions derived from neem leaf, and neem oil have also demonstrated neem’s effectiveness in promoting healthy skin.1 Scientific material regarding recent research on neem as an herb abounds, and some of it is available online. Below are links to a couple of articles that summarize recent findings:

Side Effects of Neem Oil

Neem can act as a refrigerant and can reduce the temperature of a specific tissue or even the entire body.7, 3 Neem prepared in a sesame oil base is less intensely cooling than straight neem (because sesame oil is heating). But use caution if cold is a key player in any given condition. There have been studies reporting toxicity with the use of pure extracts of neem and other preparations in large doses—specifically when taken internally.1 However, neem oil made from neem leaves is a much milder preparation that has been used topically for centuries, withstanding the test of time.

Take the quiz and receive your personalized recommendations!

While neem in a base of sesame oil is going to be gentler and less aggravating to vata than many other preparations of neem, it should be used carefully or avoided in the following conditions:

It would be safest to avoid the use of neem oil during pregnancy, although there is some disagreement in the literature as to whether this is necessary.

In general, neem should not be used in cases of high vata, wasting, or debility—such as with bone loss4—because it can intensify these imbalances.

Once you have determined which variety of neem oil you are looking for, there are a number of questions to consider that will help you to evaluate the quality of the oil, the values upheld by the company that produced it, and the price of the product in relation to its quality.

Is the supplier able to trace the ingredients back to the fields in which they were grown?

Traceability of the herbs from field to shelf allows the supplier to know where and how the herbs were grown and when they were harvested. Banyan knows exactly where each ingredient was grown and can trace them back from your medicine cabinet to the field.

Is the neem grown in optimal locations?

Location does play a role in quality. Like the grapes in wine, herbs tend to vary in quality and taste depending on the conditions in which they are grown. Banyan sources neem from areas where the trees thrive naturally.

Are the ingredients sustainably harvested?

Neem is relatively abundant in many parts of India. Where and how it is harvested makes a big difference in sustainability. Neem can be harvested on private farms where sustainability can be managed, or it may be wild-harvested from the forest legally, and sometimes it is wild-harvested illegally, threatening long-term sustainability. Banyan ensures sustainability, by sourcing the neem used in its products from privately owned farms where it has been cultivated. The ingredients are harvested at optimal times, using environmentally sustainable practices that are sensitive to the long-term health of the plants and their surrounding ecosystems.

Are the farmers looked after for their labor?

Harvesting and processing the ingredients for neem oil is labor intensive. Banyan strongly believes in maintaining socially responsible relationships with farmers. We are therefore committed to following fair trade principles which include paying above-market wages, investing in the education of the farmers, and giving back to their communities.

Are the ingredients organic?

This is an especially important consideration when choosing an oil to use internally or externally. Lipid-based products like oils are able to penetrate our cells more readily than other substances. This is actually one of reasons that herbal oils are so effective.6 However, when they contain genetic alterations or toxic residues from chemical pesticides, this level of penetrability can be quite harmful. Buying organic oils is the safest way to protect your body from these potentially dangerous toxins. Banyan’s neem oil is USDA certified organic. Banyan is able to ensure that organic farming practices are adhered to because we receive the sesame oil and the neem from trusted sources whose methods have been verified and monitored. You can rest assured that no ingredient in Banyan’s neem oil has been treated with pesticides or other harmful chemicals.

Introduction to Daily Routine
More For You
Ayurvedic Self-Massage
Abhyanga is the anointing of the body with oil. Often infused with herbs and usually warm, the oil is massaged into the entire body as part of a daily routine.
Ayurvedic Oils Help You Feel More Content

Thankfully, Ayurveda equips us with many helpful tools to help access feelings of contentment—including the practice of abhyanga, or self-massage with oil.