The store will not work correctly in the case when cookies are disabled.
Skip to Content
Fresh Start Sale! 20% Off Orders Over $60 with Code BEGIN23 | Shop Sale >>
Ayurvedic Herbs

The Benefits of Shilajit

Shilajit, pronounced “sheel-a-jeet,” is a dark, sticky mineral substance that exudes from the rocks of high mountainous regions during the heat of summer.

It may be surprising to learn that a sticky black excretion from rocks would have any health benefits, but shilajit has been used as a health-promoting ally around the world for over 3,000 years and is even considered a panacea by some.1 It is especially known for its powerful rejuvenating effects in the body, which help to support the immune system and support healthy aging, among many other incredible benefits.

Translated from Sanskrit, shilajit means “the destroyer of weakness,”2 which speaks to its incredible ability to bring strength and rejuvenation to the body. Unlike most of our herbal products, this tar-like material is not actually harvested directly from a plant.

Shilajit is created from the slow decomposition of plant material over many centuries, deep in the rocks of high mountainous regions across the world.

As it develops, it becomes a sticky, mineral-infused substance. Eventually, stimulated by the intense heat of summer, it seeps out through the rocks, finally available to harvest. This process of creation explains some of its other names, such as “blood of the mountains,” “mineral pitch,” and “juice of rock.”3

One of the reasons that shilajit is such a powerful healing substance is that it is packed with beneficial minerals, including silica, iron, calcium, copper, lithium, magnesium, manganese, phosphorous, sodium, and zinc.4 Not only is shilajit rich in organic trace minerals (in this case, “organic” means plant-derived), but it also contains fulvic acid, humic acid, amino acids, and plant-based antioxidants.5 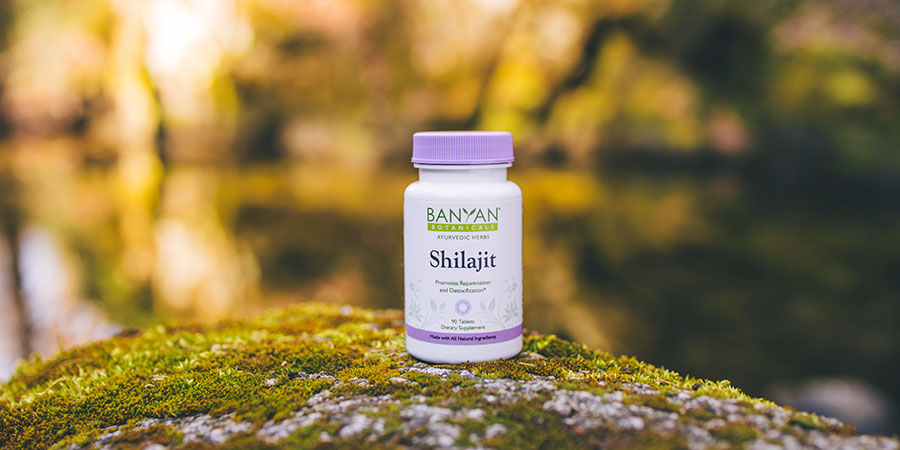 Shilajit is an incredible ally for the entire body.6 It can be used to gently detoxify the tissues, but it also has a strengthening, nourishing, and building quality. This combination makes shilajit a highly prized supplement for almost everyone that offers a number of benefits:

Shilajit includes four of the six Ayurvedic tastes—pungent, bitter, salty, and astringent—and carries a pungent, heating energy, or virya. While it is considered balancing for all three doshas of vata, pitta, and kapha, its gentle heating nature can become aggravating for pitta if used in excess.7 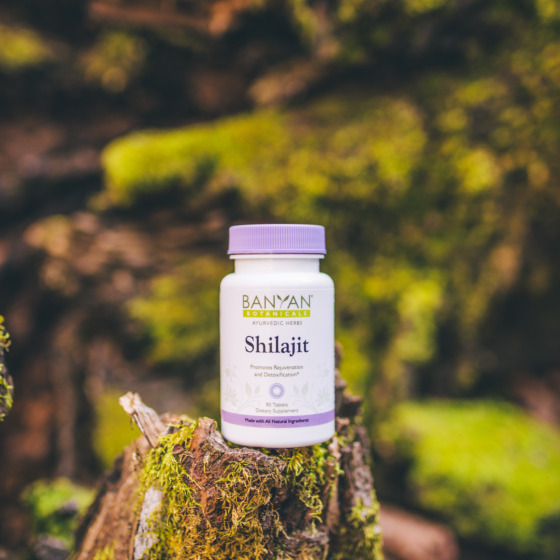 Shilajit has an affinity for the mutra vaha srota (urinary system), where it helps to clear the stagnation of kapha, tone vata, and stimulate the flow of apana vayu through the pelvic region. It also strengthens the kidneys, a vital part of the greater urinary system.

Shilajit also has a powerful effect on the medas dhatu (fat tissue) and the ambuvaha srotas (the channels of water) throughout the body, helping to regulate healthy weight and maintain well-balanced blood sugar levels in the normal range.

In the reproductive system (shukra dhatu), shilajit is renowned for supporting the health and function of the ovaries and testes. As a rasayana, it has a nourishing and replenishing quality that benefits the tissues of the entire reproductive system, protecting them from excess vata, premature degeneration, and general weakness.

Knowing this, you may ask, is shilajit is a good choice for post-partum rejuvenation? According to Ayurveda—absolutely!

On a broader scale, shilajit supports natural cleansing of any accumulated stagnation or toxicity, while also building and rejuvenating healthy tissues throughout the body. Through these actions, it is a powerful ally for balancing all three doshas.

Considering shilajit’s high mineral content and its ability to support so many systems and tissue layers in the body, it is no surprise that shilajit is considered an adaptogenic herb, making it a wonderful ally for supporting the adrenals and healthy energy levels while it helps your body cope with stress.

Traditionally, shilajit is known as yoga vahi—which means “joining carrier”—because of its ability to carry and drive nutrients deep into the body so they can work most effectively. As a yoga vahi, shilajit can be taken with other herbs and supplements to enhance their effectiveness.

How to Take Shilajit

Because taste plays such an important role in the digestive process and signals the body to initiate its own supportive mechanisms, Ayurveda traditionally recommends tasting herbs, and ingesting them in a powdered form when possible.

Because shilajit is not like a regular herb, and comes in the form of a dense sticky substance, Banyan Botanicals does not offer it in a powdered form. Instead, our shilajit is available in tablet-form for an easy and convenient way to take the substance internally.

Banyan provides tablets rather than capsules so that you can get a good taste of the herb, in traditional Ayurvedic style, if you so desire. But you will receive all the same benefits simply by swallowing the tablets. Many find this method preferable, as shilajit has a distinctly potent taste and smell.

Shilajit tablets are an easy supplement to use in your daily routine. The general recommendation is to take 1–2 tablets, once or twice daily, but we encourage you to consult with a healthcare practitioner to determine the dose that is ideal for you.

Taking Shilajit with Other Herbs

Shilajit works wonders on its own, and as a yoga vahi, it can be taken in combination with other herbs to enhance their effects.

When taking shilajit with ashwagandha, its rejuvenative qualities have a specific affinity for the male reproductive system. This combination also supports a strong, stable nervous system.8

Taking shilajit with shatavari and licorice is specifically beneficial for the female reproductive organs, soothing, nourishing and toning the entire system. It also strengthens and supports a calm, stable nervous system.9

There have been quite a few studies performed in order to research and report the health promoting benefits of shilajit. Among others, these studies have included investigations into shilajit’s positive impact on the health of the central nervous system, testosterone levels, maintaining strong immune function, and overcoming fatigue. Here are a few examples:

The safety of shilajit is well documented.13 It is considered a potent and very safe dietary supplement that has withstood the test of time.14

To ensure safety, it is important to make sure that you choose a supplement that comes from a reliable source. Your shilajit should be purified and ready for use, rather than raw or unprocessed. Raw shilajit runs the risk of containing heavy metals, fungus, bacteria, or other unwanted contaminants.15

As with any herb or supplement, consult your health care practitioner before combining shilajit with prescription drugs. And if you notice any abnormal side effects, discontinue use immediately.

Although shilajit is considered natural and safe, always consult with your health care practitioner before use, and use with caution when pregnant or breastfeeding. Shilajit should not be used if any of the following conditions are present:

The Sourcing and Processing of Banyan’s Shilajit

Banyan’s shilajit is sourced from the Balkan mountain regions in Eastern Europe. During the summer months, it is sought out and identified by harvesters who then extract the raw, tar-like resin from the rocky crevices of the high mountains.

The raw resin is then purified and prepared according to traditional Ayurvedic methods to remove any impurities and ensure the shilajit is safe for consumption. This method of purification involves a non-alcoholic extraction and filtration process using triphala tea.

Once the shilajit is purified, it is formed into solid bars, then milled into a powder, and finally manufactured into our Shilajit tablets.

As shilajit’s reputation as a health-promoting substance has grown in recent years, much of the shilajit on the global market has been harvested from the Himalayan mountain range, leading to some sustainability concerns.

In line with our commitment to sustainable sourcing, we are now acquiring our shilajit from the Balkan mountains in Eastern Europe where sustainability is not a concern.

As a part of a larger conversation regarding the sustainability of Ayurvedic herbs, it is important to understand where and how plants are grown and harvested.

We ensure sustainability by sourcing the botanicals used in our products from privately owned farms where each plant has been cultivated or harvested from legal wild-craft sourcing. Our herbs and ingredient-producing plants are harvested at optimal times, using environmentally sustainable practices sensitive to the long-term health of the plants.

Building a Healthy Immune System
More For You
Spring Rejuvenation Guide
Now is a great time to offer your system a little extra support in the way of deeply nutritious rejuvenatives. If you just completed or intend to complete a cleanse this spring, your body will be craving deep nourishment in the coming months. If you haven’t done a cleanse, you can still benefit from the Ayurvedic tradition of rejuvenation.
Fall Rejuvenation Guide
Fall is a great time to offer your system extra support with rejuvenation. The idea is to nourish yourself deeply, on all levels, for a set period of time.

13 Stohs, “Safety and Efficacy of Shilajit.”