An Ayurvedic Guide to Joint Health

When most people think “bones,” the next thing that comes to mind is “calcium.” If you are in your menopausal or pre-menopausal years, it is one of the things your personal physician most undoubtedly has recommended you take daily.

Calcium is absolutely an important mineral in our body—it is not only important for bone health, but also the health of the nervous system, muscles, heart, blood, skin, hair, and nails, among many other functions.

But the problem is that if you take calcium alone or in excess, the calcium will likely not go to the right places in the body, and may even build up in the wrong places, causing issues like accumulation in arteries or the kidneys.1

To avoid this, rather than consuming large amounts of a nutrient all at once in a day (like with a calcium supplement that contains a whopping 1000 mg of calcium) Ayurveda generally recommends acquiring our nutrients in small doses throughout the day with whole foods, including herbs.

Whole foods contain other minerals and vitamins that act like messengers or vehicles, assisting in the proper absorption and assimilation of calcium in the body.

Healthy Bones was therefore not designed to be just another calcium supplement. Banyan wanted a product that supported the human bone structure with supplements similar in nature and composition to actual human bone, and synergized with herbs that help maintain bone health at the core of the human body—the digestive tract.

A Spotlight on Coral Calcium

The first ingredient in Healthy Bones is coral calcium. Coral calcium is not just calcium—it contains minerals that are found in similar proportions in the human body.

The minerals in coral improve the bioavailability of calcium, as described by the mineral wheel, which shows how the many minerals in the body depend on each other to create a balanced physiology. 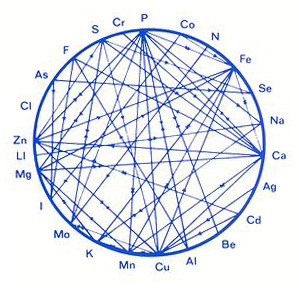 The mineral wheel illustrates which minerals interact with one another in the body.

Compared to many calcium supplements, which often contain calcium carbonate derived from limestone, coral calcium is derived from a living source.

What Is Coral Calcium?

A coral reef is made up by colonies of sea anemone-like creatures called polyps. These individual organisms take in minerals from the ocean that they then deposit as a type of hard crystalline structure—coral calcium.2

This structure is technically considered an exoskeleton of the polyps, and it is what is eventually harvested for calcium after it has fossilized, thousands of years later.

The Benefits of Coral Calcium

Because of the digestion process of the polyps, coral calcium is unique in its ionic, easily absorbable form. This results in a form of calcium that synergizes beautifully with the human body.

In one small study, when 20 healthy adult volunteers ate coral-added crackers, the absorption of calcium (as measured by the increase in urinary calcium excretion) was significantly greater than when those same individuals ate calcium carbonate-added crackers. The study found similar results with magnesium absorption.3

Further, Ayurveda has a rule of “like increases like.” Because of the similar structure and qualities, according to this rule, the human bone should assimilate the coral calcium better than calcium carbonate derived from limestone. 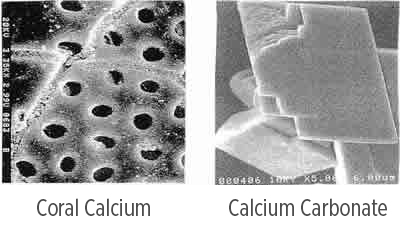 That said, some vegans and vegetarians may feel okay about using coral calcium, with the understanding that it is harvested long after the living creatures have died naturally, and with no interference to their natural habitat.

As you read this, if you are concerned about the sustainability and preservation of Earth’s natural coral, rest assured we had this same exact concern.

There certainly are some coral supplements that have been harvested from coral below sea level, which does destroy living reefs and upset ecological balance. That's why we chose a source of coral that utilizes fossilized, ancient reefs that have been geologically pushed above ground thousands of years ago.

Weak bones are more often than not caused by high ether and air elements, or vata. Ayurveda also explains that the colon has an intricate relationship with bone, and its health is of utmost importance when it comes to bone health.

Not surprisingly, the colon is the seat of vata and plays a role in the absorption of many of the minerals and vitamins important to bone health. This is why we have chosen the herbs in Healthy Bones to complement the coral calcium.

In one study of laying hens, the hydro-alcoholic extract of ashwagandha improved the retention of calcium and phosphorus in the tibia bone.8

Arjuna. Arjuna is similarly known to support bone health, along with strengthening the heart and circulatory system.

Ginger. Ginger is a great herb for detoxification and cleansing, particularly in the digestive tract. A healthy colon and digestive tract is a key factor in maintaining bone health. 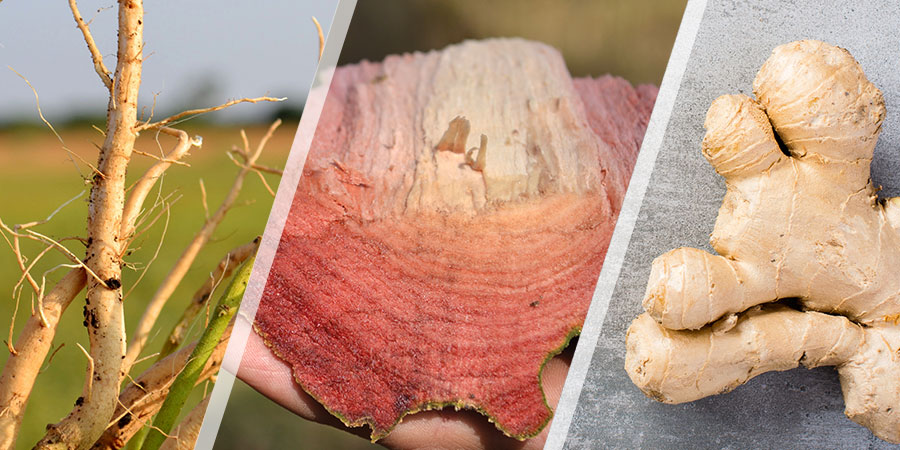 How to Get Your Daily Dose of Calcium

Getting the remaining 564 mg or so of calcium can be done easily in a number of ways. Here are a few examples of calcium derived from whole foods.9

An Ayurvedic Guide to Joint Health
More For You
Falling Into Balance: A Joint Effort

Before vata season health problems arrive unexpectedly, make a joint effort via your diet and lifestyle practices to get into healthy, healing routines.

Balancing Vata in the Joints
Balancing excess vata in the joints can help reduce dryness, cracking, popping, and stiffness. Read this resource for tips to support healthy joints.

8 Tahmasbi AM. “The effects of phytase and root hydroalcoholic extract of Withania somnifera on productive performance and bone mineralization of laying hens in the late phase of production.” Br Poult Sci. 53, no 2 (2012):204-14.