Fennel: Getting to Know Your Herbal Allies

The Importance of Healthy Digestion

As an herb with a long, rich history of culinary use, fennel (Foeniculum vulgare) doesn’t need much introduction. With a nutty, sweet flavor reminiscent of licorice or anise and its strong, slightly sweet fragrance, fennel seeds have been a favorite ingredient in cuisine for centuries: baked into breads, added to omelets, stuffed into sausages, used in sauces, soups, pickle recipes, and often added to sauerkraut.

But have you heard of the numerous healthful benefits it provides? Fennel has been used therapeutically for centuries, renowned for having the ability to stimulate the appetite, strengthen digestion, and provide a comfortable post-meal experience. And that’s not all fennel has to offer. There’s so much more to learn about this unique herbal ally!

Fennel in the Landscape

Fennel is a member of the Umbelliferae family,1 making it close cousins with the likes of carrot, dill, parsley, cumin, and coriander, to name a few.

Like its relatives, the yellow flowers of the fennel plant are grouped and arranged on a stem, spread from a common point out from the center, somewhat like umbrella ribs. This property is called inflorescence and makes for agraceful, feathery appearance.

The branching stems are finely-creased, light to dark green, with a polished look, and filled with a nearly solid core. Fennel’s seeds are oblong and five-ribbed, much like anise seeds, but larger. The plant itself can typically reach between 3 and 8 feet tall, and it prefers full sun, hot climates, and dry, limey soil.

All parts of the plant (including the pale green bulb, long stalks, seeds, and leaves) are edible.2 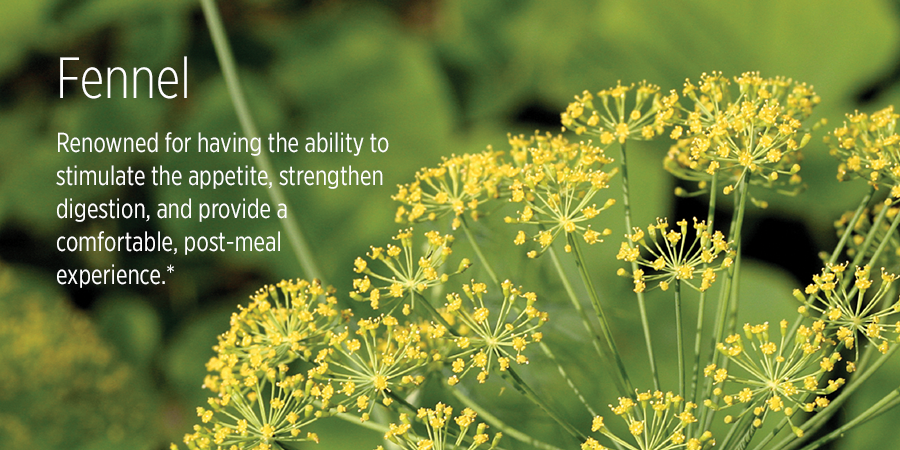 As a plant that has been widely naturalized throughout Europe, fennel’s origins are somewhat obscured. It is believed to be native to Asia from western China to the Caspian Sea, where it spread to southern Europe and the Mediterranean area. There are records of fennel being cultivated in Greece at least 5,000 years ago, where it was called marathron.3

This original name stems from the famous battle at Marathron (490 B.C.) between the Greeks and Persians, which was fought on a field of fennel.4 Marathron is also derived from maraino, which means “to grow thin”—indicative of fennel’s use as an appetite suppressant.5

Fennel’s genus name, foeniculum, comes from the Romans and is derived from the Latin word foenum, meaning “hay”; the fragrance of fennel’s dried leaves is reminiscent of hay. Foeniculum was then transformed into the Old English fenol or final and eventually became the common name fennel.6

Fennel’s popularity has long been twofold as culinary and therapeutic. Many ancient cultures cultivated the plant for its aromatic fruits and delicious edible shoots.7 But Greek physicians Hippocrates (460–377 B.C.) and Dioscorides (A.D. 40–90) and Roman physician and naturalist Pliny the Elder (A.D. 23–79) recognized the herb as an ally for remedial purposes.8

Emperor Charlemagne (A.D. 742–814) was impressed by fennel and introduced it to central and northern Europe. It gained holy recognition as one of the nine sacred herbs in England,9 and fennel’s aroma even made its way into poetry:10

“When from the boughs a savoury odour blown, grateful to appetite, more pleased my sense, than smell of sweetest fennel […]”— John Milton, in Paradise Lost

Fennel has its own myths and legends as well. In medieval times, fennel was used with many other herbs, like St. John’s Wort, as a preventative for evil influences such as witchcraft. It was hung over doors on Midsummer’s Eve to keep evil spirits at bay. It was said to convey longevity and impart courage and strength. According to Greek myth, Olympus bestowed knowledge to man in the form of a fiery coal contained in a fennel stalk.11

Benefits of the Fennel Plant

Myth and legend aside, the benefits of fennel have stood the test of time. Historically, the fennel herb was used for a variety of purposes, from a digestive aid that freshens breath and soothes the throat, to promoting milk production in nursing mothers. Fennel seeds were even chewed by early American Puritans to dull hunger pangs during church services.12

Much like their earlier counterparts, modern herbalists recommend fennel for many, if not all, of the same indications. And fennel seeds can still be seen in many Indian restaurants (look for the bowl of bright green seeds) to stimulate the appetite before a meal and function as an excellent mouth freshener after the meal.

In Ayurveda, fennel holds a special role in digestion. Because of its cooling and sweet properties, it specifically strengthens and warms agni (the digestive fire) without provoking pitta.13 And as a tridoshic herb, fennel is also balancing for vata and kapha, making it a great digestive choice for anyone to keep on hand. Fennel is also helpful for anyone experiencing post-digestive discomfort from excess vata by redirecting apana vayu.14

In addition to digestion, fennel supports many other systems of the body. Due to its vata-directing action, fennel can be used to soothe the nerves and support abdominal comfort before and during menstruation. As further support for women, fennel has a specific effect on rasa dhatu, promoting the flow of breast milk in nursing mothers.15

Its sattvic qualities are said to refresh the mind and promote mental alertness, and it’s also considered to be rejuvenating for the eyes.16 In the respiratory system, fennel even reduces aggravated kapha that congests the lungs.17 It’s difficult not to be impressed with all of the healthful benefits fennel can provide!

How to Use Fennel

There are numerous ways to incorporate fennel into your diet and daily routine. Roast a fennel bulb with your favorite veggies or all on its own. Chew on the lightly roasted seeds before or after meals for optimal digestion. Make a tea with fennel powder or whole fennel seeds, or use it as a spice in your sauces, salads, desserts, and vegetable dishes. Or try steeping it with cumin and coriander in the traditional digestive CCF Tea.

Fennel can also be found as a supportive ingredient with complementary herbal allies in many Banyan formulas. Strengthen digestion with our Pitta Digest tablets or Easy Digest liquid extract. Soothe fiery pitta with fennel in our Healthy Pitta formula. Calm the mind with I Sleep Soundly, Tranquil Mind, and I Travel Well formulas. Or use fennel’s breath freshening properties in our Daily Swish oil.

How will you welcome fennel into your life? Whichever way you choose to employ fennel’s many benefits, we encourage you to try it for yourself. All of this information may be hard to digest, but we know the perfect herb for that—and now you do too!

Pippali, or long pepper, is a close relative to black pepper. This spice is among the most celebrated herbs in Ayurveda with a long list of health benefits.

Learn how to make CCF Tea, a blend of coriander, cumin, and fennel. This beautiful golden tea supports digestion, promotes balance for all three doshas, and simultaneously grounds and nourishes the body.