Pranayama & the Power of Yogic Breathing

Don’t you just love it when modern science catches up with ancient wisdom? That is what seems to be going on with the just-published book Breath: The New Science of a Lost Art, by James Nestor. I was heartened to see that early on in the book Nestor quotes Ayurveda expert Dr. John Douillard, who has been writing about proper use of the breath for years.

Nestor points to Dr. Douillard’s ground-breaking studies about nose-breathing, which he wrote about in his book, Mind, Body, Sport. Dr. Douillard touts the benefits of breathing through the nose while exercising to increase stamina and endurance in addition to other life-enhancing qualities.

Many scientific papers have established both emotional and physical benefits of deep, slow breaths.

A 2016 paper looks at amygdala-prefrontal cortex activity activated by the breath which can regulate emotions.1 A 2014 study shows how activating the vagas nerve through controlled breathing can alleviate insomnia. And many people are familiar with the Harvard Medical School cardiologist Dr. Herbert Benson, who popularized deep breathing exercises with his relaxation response technique in the 1970s.2

All this interest in the breath. Must be something in the air! 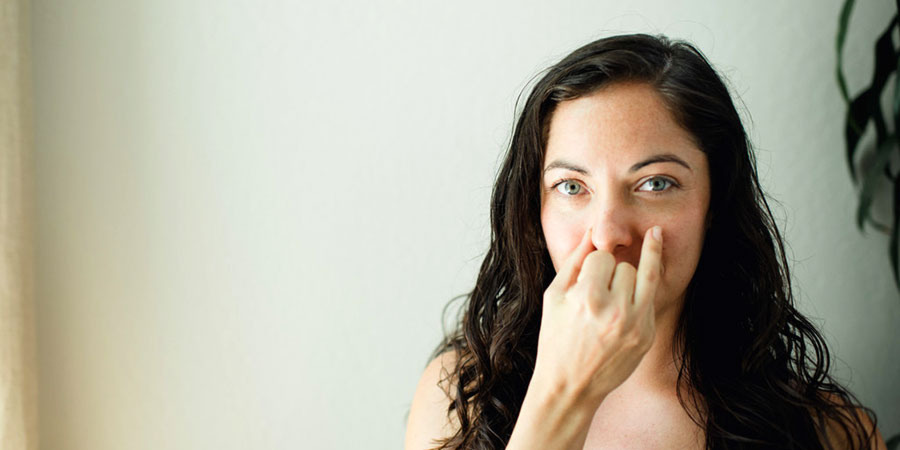 The Breath in Ancient Wisdom

These days, I find myself pondering the breath more than ever. Could it be that COVID-19 literally steals the breath away? That we now know more about ventilators than we ever wanted to? Or that we are learning more about how the vagas nerve activates the parasympathetic nervous system, creating a feeling of calm and relaxation? Whatever the reason, breathing is now a hot topic.

We have the ancient Vedic texts to thank for highlighting breath work, which is called pranayama in Sanskrit.  Even if the rishis (wise sages of ancient India) didn’t have the modern scientific evidence for its healing powers, the undeniable healing benefits were clearly known.

One ancient text, the Rishi Samkhya, explores the science of the breath as a way to control prana, or vital life force. In the Brihadaranyaka Upanishads, from 700 B.C.E., it is noted that “one should indeed breathe in when rising up.” The text also says that “prana invigorates and recuperates the body.”

The Brihadaranyaka Upanishads also describe the Self as “the one who breathes, who is prana of the pranas, and whom prana serves.”3 This text contains some of the first studies and insight on prana, breath, and the foundation of its importance to Ayurveda. 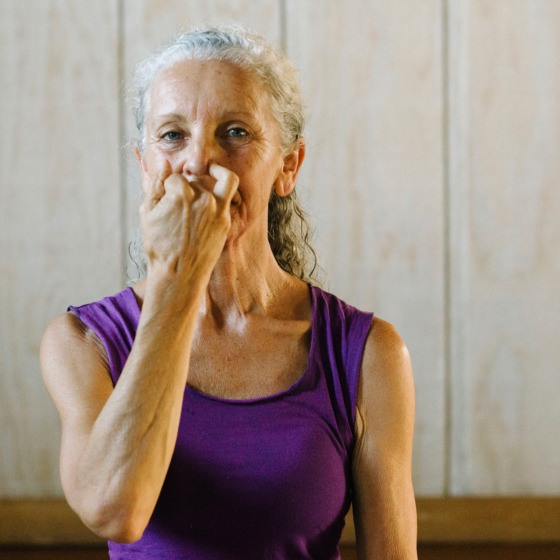 The Science of Breathing

I have always been fascinated by the breath, especially the word, which in many languages correlates to the soul, spirit, or the element of wind. It is also associated with the feeling of inspiration, and with life itself.

We come into the world with an in-breath and we exit with an out-breath.

When I began studying meditation and yoga decades ago, I learned to base both practices on the breath. The movement of the mind and body, I was told, were inextricably connected to breathing. In fact, I was so deeply attached to the word “breath” that I opened a bookstore in the early 2000s called Breathe Books, which then became Breathe Bookstore Café. And now it has evolved into Breathe Ayurveda.

The benefits of pranayama are vast, wide, and deep.

Most of the traditional breath practices are techniques that involve nose breathing, although a few include breathing through the mouth. Different practices offer dosha-specific balancing techniques, such as Sheetali for cooling hot pitta, Nadi Shodhana for grounding distracted vata, and Bhastrika for activating sedentary kapha.

One of the major benefits of nose breathing is the production of nitric oxide (NO). The discovery of this compound was so important to our health that the man who found it won a Nobel Prize for his work!4

NO, as it is known, delivers healing oxygen deep into the seven layers of our tissues, or dhatus—plasma, blood, muscle, fat, bones, nerves, and the male and female reproductive organs. NO maintains healthy weight, boosts immunity, increases sexual function (Viagra works by increasing NO in the blood), and elevates mood. You can do all of this and more, just by breathing through your nose!

This also makes sense when you think about breathing through the nose from an Ayurvedic perspective—since Ayurveda views the nose as the direct route to the brain and as the doorway to consciousness. In fact, Ayurveda recommends daily nasal lubrication (nasya) to enhance the flow of prana through the nose. Administering herb-infused nasya oil to the nasal passages can also promote mental clarity, relieve tension, and reduce stress. 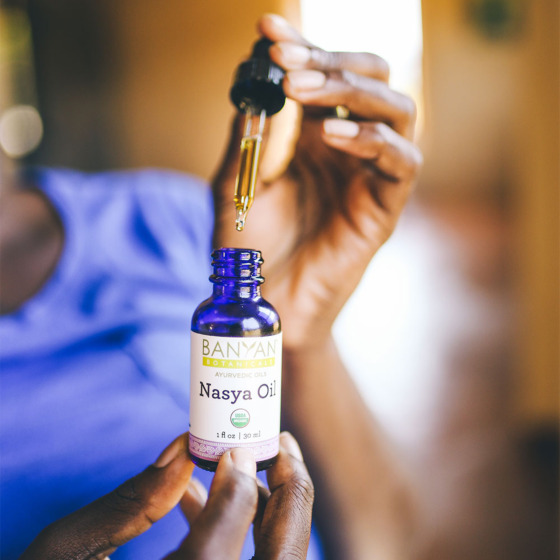 Another way to increase the calming effects of the breath is through chanting and prayer. Several scientific papers have been published detailing the emotional and mental benefits of chanting certain syllables, for a specific period of time, as well as the physical health benefits that can be achieved.5

How Breath Affects Our Health

In Breath, Nestor points out that many modern ailments are caused by our inability to breathe properly. The entire shape of the face and jaw, and the position of our teeth, is related not only to how we chew and move our jaws, but also how we breathe and whether we are a mouth breather or a nose breather.

Malformation of the jaw, teeth, and face, caused by mouth breathing, can lead to a whole host of imbalances, potentially impacting sleep, immune strength, and more.7

On the other hand, breathing through the nose and proper belly breathing will slow the heartbeat and can even stabilize or lower blood pressure. 8

The ancient Vedic texts and modern science have both shown that breathing in deeply to your belly and exhaling fully creates the perfect exchange of oxygen and carbon dioxide.

Many people seem to be in such a rush in their daily lives that they even rush through breathing. These short breaths reach only to the upper lobes of the lungs, creating a stress response that most people don’t even realize. Those short, shallow breaths trigger stress hormones that lead to a fight or flight response.9

If you are being chased by a tiger you need this response. Hormones begin a cascade effect throughout the entire body to get you ready for the fight. Your breath becomes quick and shallow, which activates the sympathetic nervous system and a whole host of actions to follow.

You can become flushed or pale as the blood is shunted away from the organs and the platelets become sticky to protect you from bleeding out if that tiger catches you. Your muscles become tense and ready for attack, and you begin to tremble. Heart rate, blood pressure, and breathing all increase, keeping you on high alert.

Luckily, most of us are not about to be eaten by a tiger. But even the smallest things—like being cut off by a car on the highway, a robo-call at dinner time, or someone in the express lane with a cart full of groceries—can activate this response in our nervous system. Repeatedly having this response to mundane moments in life will cause extreme damage to the body.

Conversely, long, slow, deep breaths penetrate all the way down to the lower lobes of the lungs.

It is this deep and complete breath that relaxes and heals us.

Through the use of pranayama, we access the full capacity of our lungs, creating practices that help us to attain the immense healing benefits of the breath.

Relearning How to Breathe

Deep belly breathing is the antidote to what ails you—from reversing fight or flight, to reducing everyday stress and anxiousness, to creating a strong foundation for your meditation, yoga, and deep sleep.

So even though modern science is now in agreement with the ancient pranayama techniques, what holds us back? Oftentimes, I think we simply forget. And the truth is, most of us have never really been taught how to breathe.

We tend to hold our breath precisely at the moment we should be breathing deeply! You may notice this in your own life. Are you holding your breath right now?

Another possibility is that a deep inhale will expand the belly and many of us don’t want to draw attention to our stomachs.

In my meditation classes, I demonstrate deep breathing by placing my hands on my belly, fingertips touching. I ask everyone to watch as I inhale and my fingertips separate. On the exhale, my belly recedes and my fingers come back together.

I never imagined that I would ask a room full of people to look at my belly! But I realized that was part of the problem. No one wanted their stomach to stick out. We have been taught to suck it in, never showing anything other than a flat belly.

Are we so self-conscious that we are willing to risk our health? My advice—get over it! The vanity of gripping and holding tight to your stomach muscles—especially on a deep inhale—will result in you not breathing deeply and perhaps succumbing to imbalances.

The Breath of Life

Without the benefit of modern scientific tools, the great rishis gained knowledge of deep breathing through the cosmos. Cosmic Breath is the prana of the universe. Prana is the energy that infuses all life. Without prana, there is no life.

We now know that deep, intentional breathing increases pranic life force through nitric oxide and activation of the parasympathetic nervous system, which in turn allows the body to repair and heal itself. Whether you call it vagas nerve breathing or pranayama, the results are the same—happiness, health, and a boost to the immune system! 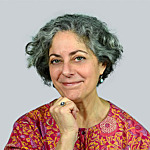 Susan Weis-Bohlen is an Ayurvedic consultant, and, pre-COVID, taught cooking, meditation, and led sacred site tours, mostly in India. In 2008 she became certified from the Chopra Center in Ayurveda and has studied with Dr. Vasant Lad in New Mexico and India. Additionally, she is certified in Ayurvedic cooking from Amadea Morningstar. Susan lives with her husband Larry and their three dogs, Ella, Shadow, and Joonie (a rescue from Pune, India), in the woods in Reisterstown, Maryland, just outside of Baltimore City.

9 “How the Fight or Flight Response Works.” The American Institute of Stress, August 21, 2019. https://www.stress.org/how-the-fight-or-flight-response-works.