What Happened When Healthy Skin Was Put to the Test?

With an increased awareness of healthy lifestyle changes, the demand for natural and alternative skin care methods in place of prescription medications has gained favor. Fortunately, Ayurveda offers a great deal of skin care knowledge and perspective.

Dr. Raja Sivamani, an esteemed dermatologist with a deep passion for Ayurveda, has done commendable work in the field of dermatological research and is currently serving as an Associate Professor of Clinical Dermatology at the University of California, Davis.

The results found Healthy Skin to be effective in reducing facial redness and promoting natural skin health through its work in supporting skin barrier functionality. This study, which is outlined here, was published in two different journals: The Journal of Integrative Medicine, which shared the findings on facial redness, and the Journal of Medicinal Food, which shared the findings on skin barrier function, specifically on sebum production and trans epidermal water loss (TEWL).

The skin is the largest organ of the body. It is one of our most versatile organs and it maintains several functions: it acts as a protective layer and the first line of defense against bacteria, it regulates body temperature with the help of sweat glands, and it acts as a natural filtering system.i

Ayurvedic skin care aims to identify and treat the underlying root cause of skin imbalances. While skin conditions can appear superficial in nature, the skin is actually a wider reflection of our overall health. Skin conditions are rarely caused by an issue on the surface of the skin—they are far more likely to be the result of a deeper imbalance, which makes it ineffective to treat the surface condition alone.  Instead, superficial skin conditions often need to be managed at a deeper level by cleansing the blood, liver, and lymphatic system.

Furthermore, clear, radiant skin requires proper nutrition, hydration, protection, adequate sleep, the reduction of stress, and the elimination of waste products. Skin issues can occur due to inflammation, excess heat, and inadequate nourishment. Toxins may also accumulate in the body’s tissues due to poor lifestyle choices, weak metabolism, or other factors, and this build up may also manifest in the skin. 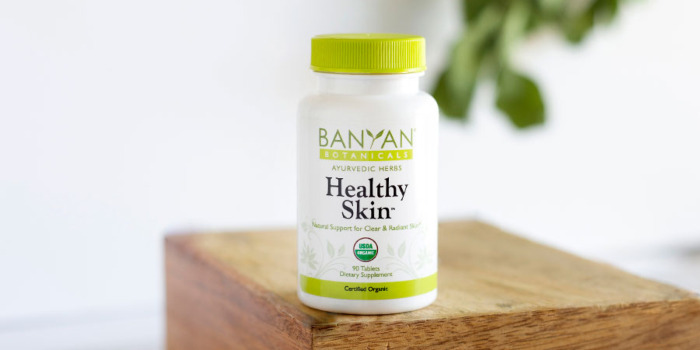 Healthy Skin is formulated with a unique blend of nine herbs known to support beautiful, radiant skin from the inside-out.

Total herb weight per tablet is 500 milligrams. This formula supports the body’s natural cleansing processes and assists in removing toxins from the blood, lymph, and liver, which has a direct impact on the health of the skin. In addition to its cleansing properties, it is also designed to support the rejuvenation of the skin cells and the skin’s natural healing process, which helps with a clear complexion. While it is considered balancing for all doshas, it can be particularly helpful in calming and soothing excess heat and pitta that can show up in the skin. 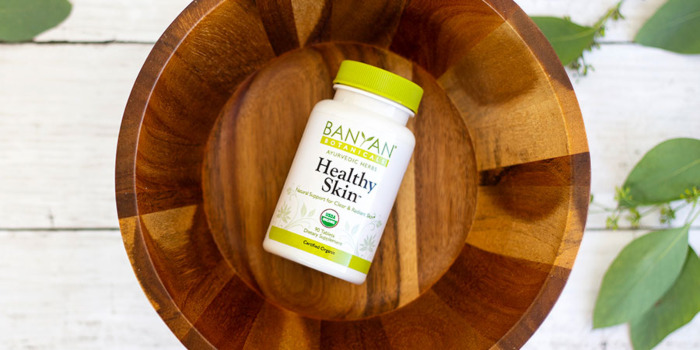 The objective of this trial was to survey the effects of Healthy Skin compared to Turmeric tablets and a placebo to observe any notable changes in facial redness and skin barrier function, particularly trans epidermal water loss (TEWL) and sebum production.

Dr. Sivamani and his team began this four-week, randomized, double-blind study in the fall of 2016. Those taking Healthy Skin tablets were compared to those taking Banyan’s Turmeric tablets and a placebo.

To enroll in the trial, thirty participants were screened to meet specific criteria. The exclusion criteria included: those who had been diagnosed or had a history of diabetes, metabolic syndrome, cardiovascular diseases, any known electrocardiogram changes, malignancy, or kidney diseases, chronic steroid use, smoking in the past year, known allergies to ingredients, excessive caffeine intake, or were pregnant or breastfeeding at the time of the trial.

Participants who were on any oral medications were also required to stop a month prior to beginning the trial. In addition, they were advised to avoid all other turmeric-containing foods or supplements during the study.

Ten participants were randomly assigned to each group respectively and were not aware of which tablet they received for the duration of the trial. Two participants dropped out due to non-attendance at scheduled visits. 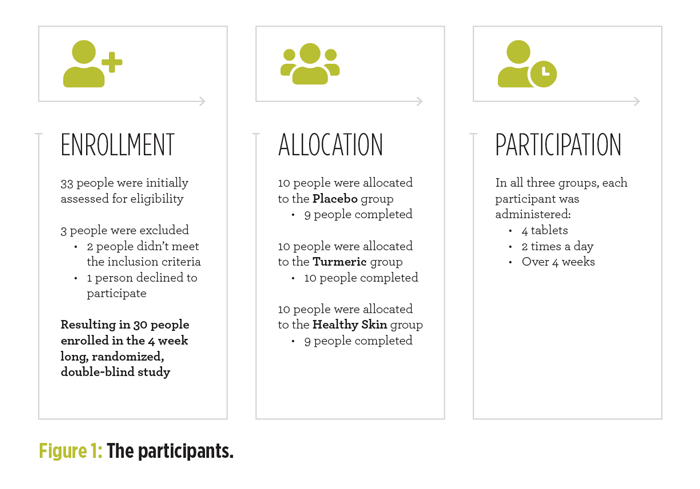 Participants were instructed to take four tablets orally, twice a day (total of eight tablets per day, at 4000 mg) for four weeks. They were seen at different points of the study period for evaluations: an initial pre-screening visit, a baseline visit that initiated the trial, and at a last visit when the four week trial was completed.

Facial redness was evaluated by observing intensity and distribution of color on the forehead and cheeks and measured using BrighTex Bio-Photonics Clarity Research 3D System, which is a camera system for skin analysis and clinical research. Photographs were taken at the baseline visit and at the last visit at the end of the four weeks. The photographs were then rated using a standard, validated four- and six-point scale that is used for measuring facial redness intensity and distribution of redness.1

Because this study had a small population size, Hedges’ g score was used to measure the effect of Healthy Skin tablets on facial redness when compared to placebo and Turmeric tablets. 3 Hedge’s g score was calculated to be 0.48 for redness intensity and 0.09 for distribution, indicating that the effect size was moderate and small for intensity and distribution of facial redness, respectively. In other words, the Healthy Skin group was shown to be more effective with reducing the redness intensity, but as far as redness distribution, its effect was smaller compared to the Turmeric and placebo groups. 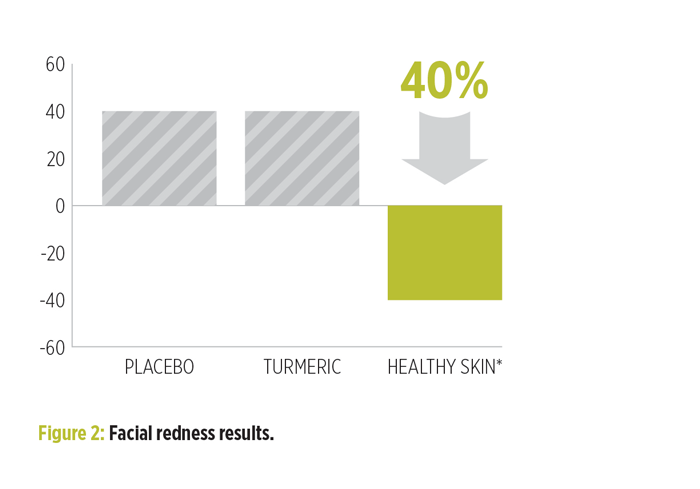 These findings on facial redness were published in the Journal of Integrative Medicine.ii

Understanding TEWL gives insight into evaluating skin barrier functionality. TEWL is the amount of water lost from the outermost layer of our skin, the epidermis, to the surrounding air through evaporation and is used to characterize skin barrier function. The average TEWL in human is about 300–400 mL per day; however, it can be affected by environmental and intrinsic factors. iii The more humid an environment, for example, the slower TEWL tends to be, while very dry environments can increase TEWL. When the skin loses water faster than the body can replace it, the skin will become dry.

Sebum is a light yellow, oily substance secreted by the sebaceous glands. Its main function is to protect the skin and hair from moisture loss. It also helps to maintain the elasticity of the skin and acts as a protective barrier to foreign microbes.

The primary measure of this trial was to observe a change in TEWL and sebum production. Secondary measures included facial analysis of wrinkles and pigmentation.4

Testing was conducted on the participants’ forehead and cheeks. TEWL and sebum were measured at the baseline visit and last visit using the VapoMeter and Sebumeter, respectively. Participants were instructed not to bathe or apply any topical medications or moisturizers for twelve hours before their visit. All photographs were taken at the baseline and last visits using the Clarity Research 3D System. In addition, changes in facial pigment and wrinkles were observed and recorded. The p-value for this portion of the study was also set at 0.05. Dr. Sivamani also used a paired t-test to compare changes from the baseline visit.5

The Healthy Skin group was the only group which had a significant decrease in TEWL with a p-value of 0.003. With such a low p-value, it is clear that the results are due to the Healthy Skin and not due to chance occurrence.

In addition to these primary measures, any changes in facial pigment and wrinkles were also observed. The Turmeric group showed the biggest decrease in pigmentation when compared to Healthy Skin and placebo. Healthy Skin tablets also showed a decrease in pigmentation by 1% (p-value 0.08), and as this did not meet the p-value of 0.05, it is not statistically significant. No difference was noticed on wrinkles. 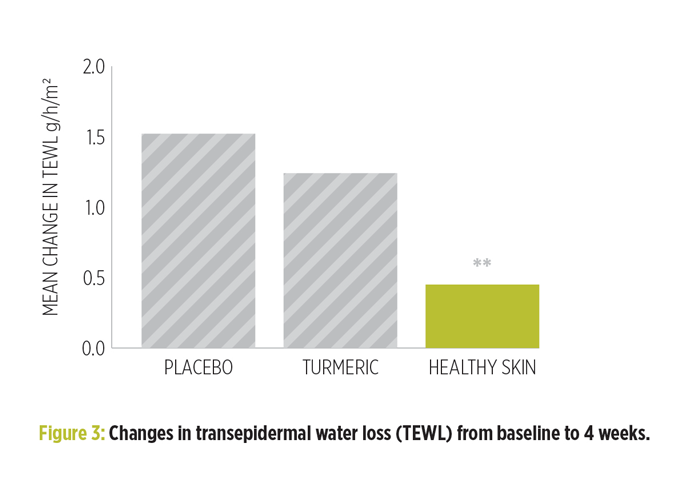 No significant changes were observed in sebum production, although a difference can be noticed in numbers. The p-values for sebum production in all the three groups are more than 0.05 and thus can’t be concluded to be as statistically significant.

These findings on skin barrier function were published in the Journal of Medicinal Food.iv 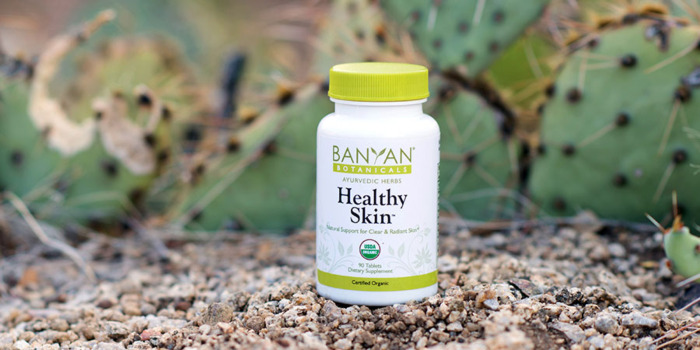 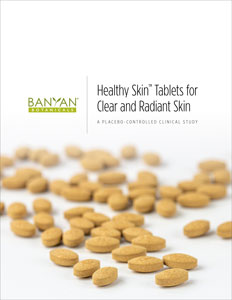 While this study is small and we anticipate further studies to be done, the results are impressive in showing Healthy Skin’s effect on working to decrease the intensity of facial redness and to decrease trans epidermal water loss, supporting overall healthy skin. While the results for sebum production were statistically insignificant, it is possible that in a larger study we could better study and determine Healthy Skin’s impact on sebum production.

Vrinda Devani, M.D. is the Director of Product Development and Research at Banyan Botanicals. As an Obstetrician and Gynecologist, she has a passion for women’s health and empowering women towards vibrant health and living. She is a believer in unfolding the human body’s potential through a blend of complementary and allopathic medicine. She has studied Ayurveda extensively under Dr. Vasant Lad and furthered her studies in Ayurvedic women’s health with travels in Nepal with Dr. Sarita Shrestha.

In addition to being a physician and certified Ayurvedic practitioner, she also has a love for yoga and is a certified AyurYoga teacher.

Soothe Your Skin Guide
More For You
What Happened When Healthy Skin Was Put to the Test?

Radiant Beauty
Ayurveda often emphasizes healing from the inside out, but it also has beauty rituals and self-nurturing practices that focus more on the exterior of the body.

1 The scale used is a validated, standard measurement understanding facial redness intensity. Pictures were taken at the baseline visit and at the completion of the trial after the four weeks, which were then rated according to the validated scale.

3 Hedge’s g-score is a statistical test used to measure the effects of Healthy Skin, Turmeric tablets, and the placebo. The effect size helps determine how much each group differs from one another.

5 The paired t-test is a type of statistical hypothesis that ensures the trial is the reason for the results.