How Cleansing Has Transformed My Life

An Introduction to Ayurvedic Cleansing

Before I discovered Ayurveda, I had never done a cleanse. I had heard about several—green juice cleanses, the lemon juice/maple syrup/cayenne cleanse, fasting—but none of these sounded the least bit enticing to me. I loved food too much! And I knew myself—if I went a day without eating I felt low in energy, irritable, and headachy. Maybe that was all part of cleansing, but it didn’t feel right for me.

When I was 26, I gave birth to my beautiful daughter (who today is almost as tall as I am!). I nursed her for two years, and during that time I learned a lot about health and cooking. I wanted my daughter to have the healthiest possible life, so I spent an enormous amount of time and energy preparing fresh food for my partner, our daughter, and myself. I went sugar free and wheat free. I got a little extreme with the veggies.

The whole thing was really pretty extreme, to be honest… That’s just the mindset I was in at that time.

One of the things I explored during this health crusade was Ayurveda. At first I understood it to be a system for determining body types, and therefore which foods were best for each body type.

And, being in the extreme mind state that I was at that time, I even took Ayurveda to an extreme. I made lists of what to eat and what not to eat, compared my list with my partner’s list, and made another list of what we could both eat. Knowing now what I know about Ayurveda, this was mostly missing the point. But, it was a jumping off point. 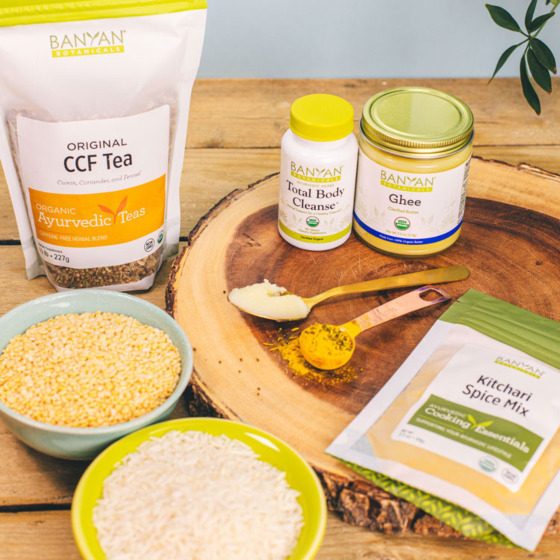 Around the time I was weaning my daughter, an Ayurvedic practitioner in my area (Ronly Blau, who I would eventually co-author a cleanse book with) was offering an Ayurvedic cleanse in a group format.

I was intrigued, because Ronly promised that I would get to eat food, and that I wouldn’t be hungry. My type of cleanse! I was also in love with Ayurveda and I knew the tradition of cleansing in Ayurveda went back thousands of years, so it was obviously not a fad. I signed up and got ready for the ride.

Reclaiming My Vitality and Well-Being

To say that cleansing changed my life is an understatement. That first cleanse was eight years ago and I have continued to cleanse twice per year since then. Every additional cleanse peels back another layer and changes my life in a new way.

The earliest cleanses returned my energy and vitality. I clearly remember a moment when I thought, “I’m not crazy anymore!” More specifically, I stopped having the blood sugar crashes that I had been experiencing for years without really understanding what they were. If I hadn’t eaten in a couple hours, I would feel a little agitated, maybe tired, sometimes even anti-social.

I wasn’t hungry, so I never associated it with food or the sense of being “hangry.” If I waited long enough to get hungry before eating, I was beyond major crash mode and could barely think straight.

But there I was, seven days into a fourteen-day cleanse, feeling clear and calm even though I hadn’t eaten in several hours. My stomach growled—I was actually hungry—but I wasn’t crashing.

The Ayurvedic cleanse also curbed my habit of overeating. This, I later learned, was also related to blood sugar crashes. I would eat until I was full, and then continue eating. I hated feeling so full that I could hardly move, but I also felt strongly compelled to eat more. My body was desperate for fuel, since it wasn’t lasting long enough to get me to the next meal.

During my cleanse experiences I also began to tune in to the subtle sensation of feeling satiated, and understanding when I was actually full.

I think the most powerful part about this is that it drastically changed my relationship to food. I was eating to nourish my body, not for entertainment or distraction or emotional soothing. What a beautiful thing—to eat for the sole purpose of nourishment.

As expected, digestion also improved, and with it a feeling of lightness. No longer did I feel heavy after a meal, and elimination became regular and complete.

Continued Cleansing: the Gift that Keeps on Giving

It took several cleanses to really streamline digestion for me because I had issues that had been going on for years, but the rich tradition of Ayurveda provides various ways to go deeper and deeper into resolving these issues. With each cleanse, my body takes on a new level of efficiency and I continue to learn new therapies to support the process.

Because the Ayurvedic cleanse is about more than food, it jumpstarted a healthy daily routine for me. A morning ritual of yoga and pranayama quickly became a norm, and it cultivated a new sense of calm energy that I carry through my day. While I always had good intentions in the past to make this a habit, it was the structure of the cleanse that made it a reality.

I have heard many cleanse group participants report that this was an unexpected and wonderful side-benefit of the cleanse that they happily took away from their experience.

Eventually, I got to a place in which my body remained efficient and stable. Blood sugar levels were steady and digestion was great. My daily routine was on-point.

So Why Continue Cleansing?

Initially, I continued because I loved the “me” time that the cleanse ritual allows. For two weeks, I turn my attention inward. I minimize distractions and extra activity. What I discovered, however, is that each cleanse reaches a deeper level and peels away a layer that I didn’t even know was there to be peeled away.

I have had intense experiences of my heart opening, or my senses sharpening, or my ability to feel compassion for others deepening. As I prepare for each cleanse, I acknowledge that I don’t know what is going to happen, but that something is certain to unfold.

This is possibly the most profound experience of cleansing—learning to trust the process, accept what is, and release the need to control things.

Today I think of Ayurveda as a life philosophy centered on finding balance and following the middle way, not a list of what to eat or not eat. Cleansing is an integral part of this philosophy, as it provides a platform for deeper understanding of my body, my mind, the world around me, and how these are all connected.

If you feel ready to try a simple yet powerful cleanse of your own, Ayurveda offers a flexible and approachable structure. Banyan’s Cleanse Bundle is a good place to start for support with easy and delicious cleanse-friendly meal ingredients and products.  You may also want to add a few basic items to support your daily routine while cleansing, such as Daily Massage Oil, Daily Swish, and a tongue cleaner.

In modern traditions, many people think of cleanses as something to be conquered and a way to manipulate us, or our bodies, into something that fits an ideal mold.

I encourage you to take a step back and consider how you can approach a cleanse with a sense of love for yourself and a spirit of curiosity about what might happen, rather than trying to force anything specific to occur. When we enter into a cleanse with this mindset, we are truly practicing Ayurveda by making space for our highest potential to shine through.

Adrian Nowland is an author, writer, educator, Ayurvedic Wellness Counselor and currently an Occuptional Therapy student at Loma Linda University. She is the co-author of The Mindbody Cleanse: A 14-Day Detox and Rejuvenation Program from Ancient Ayurveda. She studied at Kerala Ayurveda Academy and the Institute for Integrative Nutrition. She leads group programs, retreats, and workshops that share the wisdom of Ayurveda so that others may benefit from its rich teachings. For more information on her offerings, go to her website. Adrian lives in beautiful Idyllwild, California, with her beautiful and creative daughter. See more of Adrian on her Twitter & Facebook.

3 Simple, Satisfying, and Cleanse-Friendly Recipes for Fall
More For You
3 Reasons to Do A Group Cleanse

When it comes to food and cleansing, there’s an abundance of information out there. How do you know what protocol to choose and if it’s right for you?

5 Common Mistakes to Avoid When Cleansing

When done correctly, cleansing can rebuild your body from a place of nourishment and love. Here are five mistakes to avoid for a better cleansing experience.