Mucuna Pruriens: Getting to Know Your Herbal Allies

The Benefits of Mucuna pruriens

Like Jack’s beans of the famed “Jack and the Beanstalk,” Mucuna pruriens, also known as velvet beans, have their own special kind of magic. There are over 150 species of the genus Mucuna, with the velvet bean being especially prized over the centuries for its rich protein and mineral content.

One variety of Mucuna is known as “cowhage” or “cowitch.”1 Its Sanskrit equivalent is kapikacchu which means “one starts itching like a monkey.” This term alludes to the long stinging hairs on the pod of this particular variety, known to cause one to start itching like a monkey. Its other Sanskrit name, atmagupta, means “secret self,” referring to the potent bean hidden and protected by its silky-haired pod.2 In Hindi, Mucuna is known as kevatch. Some of its other names around the world include: fagiolo di Rio Negro, fogarate, jeukerwt, juckbohne, kekara gatel, pien tou, rarawejah, and t’ao hung king.3 Mucuna pruriens belongs to the pea/bean family, Fabaceai/Leguminosae. It is native to tropical parts of Africa and Asia, and its creeping vine grows all over India. It can also be found growing in the southeastern United States, the Pacific Islands, and parts of Latin America, where the beans are roasted and ground into a coffee substitute called nescafe.4 Talk about a cosmopolitan bean! 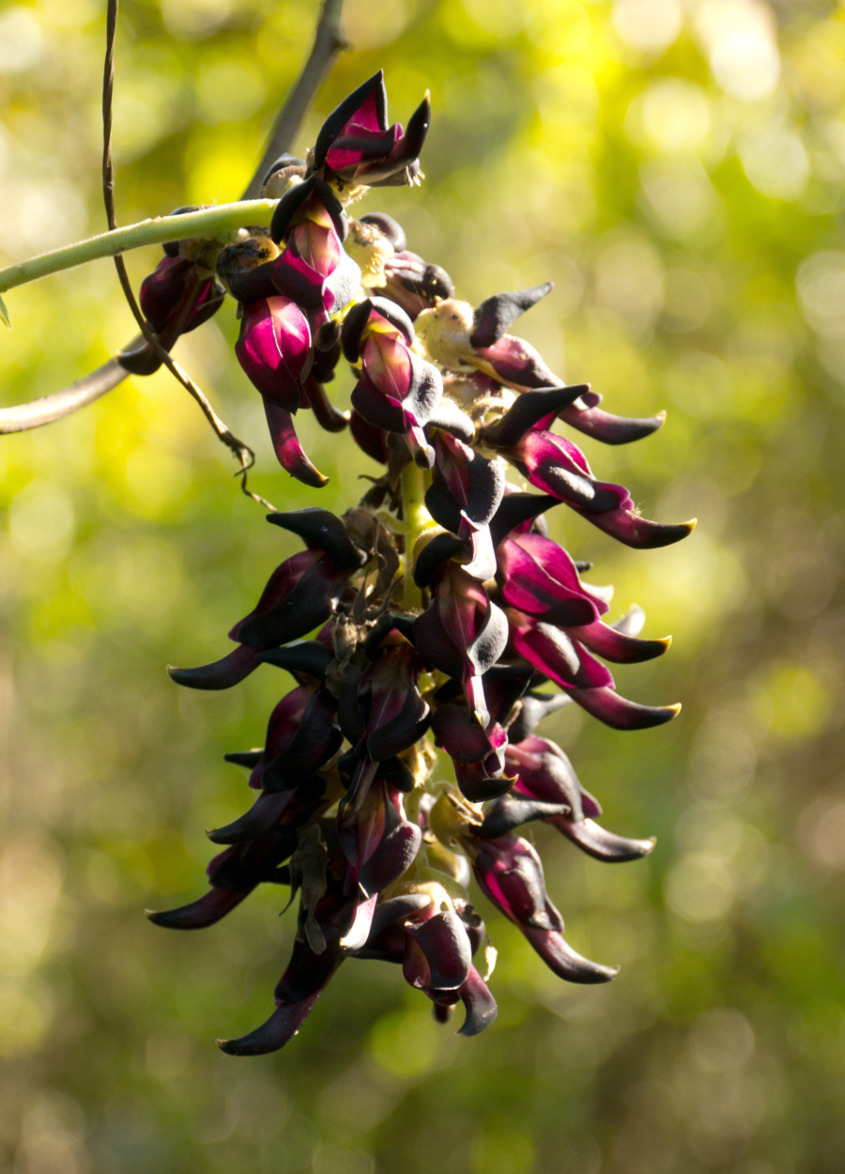 One major benefit of Mucuna is its profound affinity for the nervous system. It is well known to be a natural source of the amino acid levodopa, or L-dopa, the precursor to the neurotransmitter dopamine.5 (Dopamine itself is a precursor to epinephrine and norepinephrine, two of the body’s main stress hormones.) Why is this significant? As it acts as a chemical messenger between brain cells, dopamine plays a critical role in brain function, and thus our entire health and well-being. While dopamine plays many roles in our daily behaviors, it largely influences our motor control, speech, reward response, and reinforcement of behavior. It also affects our moods, stress response, and our focus. Levodopa is able to cross the blood-brain barrier where it is then converted to dopamine.6 In Ayurvedic terms, Mucuna is soothing to vata dosha and nourishing to majja dhatu, one of the body’s seven tissue layers and the layer that includes the nervous tissue and bone marrow.7

Another benefit is its tonifying effects on both the male and female reproductive systems. In Ayurvedic pharmacology, Mucuna is classified as an aphrodisiac. Now, from an Ayurvedic perspective, an aphrodisiac does more than just increase sexual desire. In Ayurveda, rejuvenation is an important concept. Rejuvenation includes using tonic herbs, foods, and practices to nourish the body’s tissues, build strength, enhance ojas, and fortify immunity. The qualities of these foods and herbs contribute to an anabolic, or building, state of the body. For example, nuts, ghee, and dairy are considered heavy, oily, and sweet—nourishing and building qualities—and the sweet flavor itself is considered tonifying and rejuvenating. Mucuna is a sweet herb and a tonic to sukra dhatu, the tissue layer containing the reproductive organs and tissues, thus nourishing this system and its vital functions.8 Not only do the sexual organs contain the ability to create a child, they are also said to be the root of our own creative capacity, to generate our own life and vitality. This is, in fact, why some religious followers and yogis follow the path of celibacy. Brahmacharya is the philosophy of sexual restraint. One interpretation of brahmacharya is “that which causes the Creative Energy of the universe to accumulate within you.”9 According to this concept of rejuvenation, by revitalizing the sexual organs, the entire body is enlivened.

The digestive system is known to be significantly affected by the state of our nervous system. Consider the fight-or-flight mechanism and the body’s tendency to halt digestion in the face of fear or stress. Because of its work on the nervous system, Mucuna can help alleviate intestinal discomfort, gas, and constipation.10 Mucuna is also said to support healthy blood sugar levels that are within the normal range and to be an excellent source of protein and minerals.11 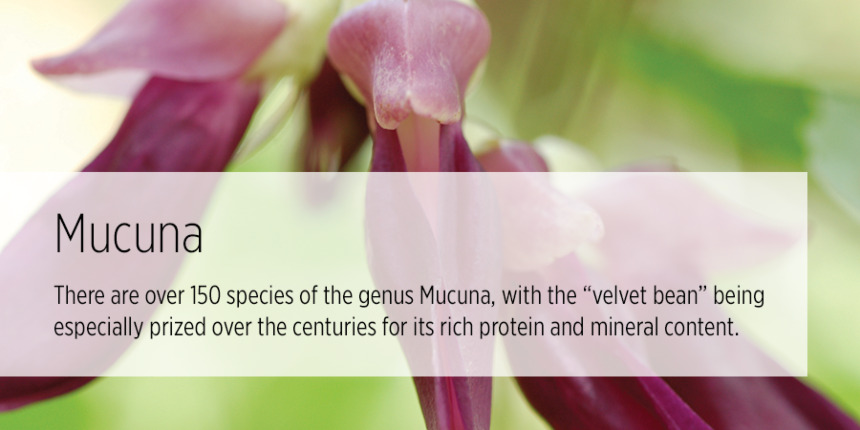 How to Use Mucuna

Mucuna is offered as a bulk powder, tablet, and liquid extract. The mode of administration depends on various factors, lifestyle being one of them. Traditionally, herbs are made into a churna, and taken with warm water as a tea. As Mucuna is a sweet herb (as opposed to a bitter one), it is not unpleasant to take on its own. Mucuna is often used in tandem with other tonic herbs, such as amalaki, ashwagandha, shatavari, vidari kanda, and gokshura.12

Mucuna pruriens powder offers the full experience of tasting the herb and also provides the most economical option for purchasing it. A typical dose of the powder is ¼–½ teaspoon, once or twice daily, or as directed by your healthcare practitioner. Mucuna powder can be taken with water, milk, ghee, honey or another anupan (carrier substance), which acts as a medium for delivering the herb to its intended destination and can enhance its effect. To learn more about anupans and how they work, see the Ayurveda's Carrier Substances guide. It can also be cooked into rice or made into an herbal jelly.

Mucuna is available as a tablet and several of Banyan’s herbal tablet formulas combine Mucuna with a blend of equally supportive herbs. Herbal tablets offer a convenient way to take an herb, especially for those who are frequently traveling or on the go. The tablets also provide a good alternative for those who find the taste of a particular herb a deterrent to taking it. Banyan provides herbs in a tablet form, rather than a capsule, because taste is an important detail in a healthy digestive process. A typical dose is one to two tablets, once or twice daily, or as directed by your healthcare practitioner. To try Mucuna as part of a supportive blend, you might consider Healthy Vata, Men’s Support, and Stress Ease.

Banyan’s Mucuna liquid extract is a fast-acting and convenient alternative to powder and tablets. Suspended in grain alcohol and deionized water, one serving of liquid extract is, approximately, 333 mg of Mucuna seed. Simply add to warm water or juice and take 1–3 times a day.

Mucuna is typically considered more balancing for vata and pitta dosha, given its sweet and heavier nature. This does not mean that kapha dosha types are exempt from Mucuna’s benefits, it just means kapha folks would be careful not to use it in excess. If you are not sure of your special dosha type, the Ayurvedic Profile™ quiz is a wonderful resource to get you started on your Ayurvedic journey.

When to Use Caution with Mucuna

While it has been reported that all parts of the M. pruriens plant have valuable therapeutic properties, as mentioned before, its “velvety” hairs can cause irritation to the skin, and make you start itching like a monkey! Unless found in the wild, chances are the powdered bean is the only part of the plant one would come into contact with in the public sphere. As with all new substances introduced to a healthcare regimen, we always recommend consulting with your practitioner, especially if you are taking medications of any kind. You would also want to avoid Mucuna if there are any known allergies to the Fabaceae (pea) family. And if you are pregnant or nursing, please consult your doctor. 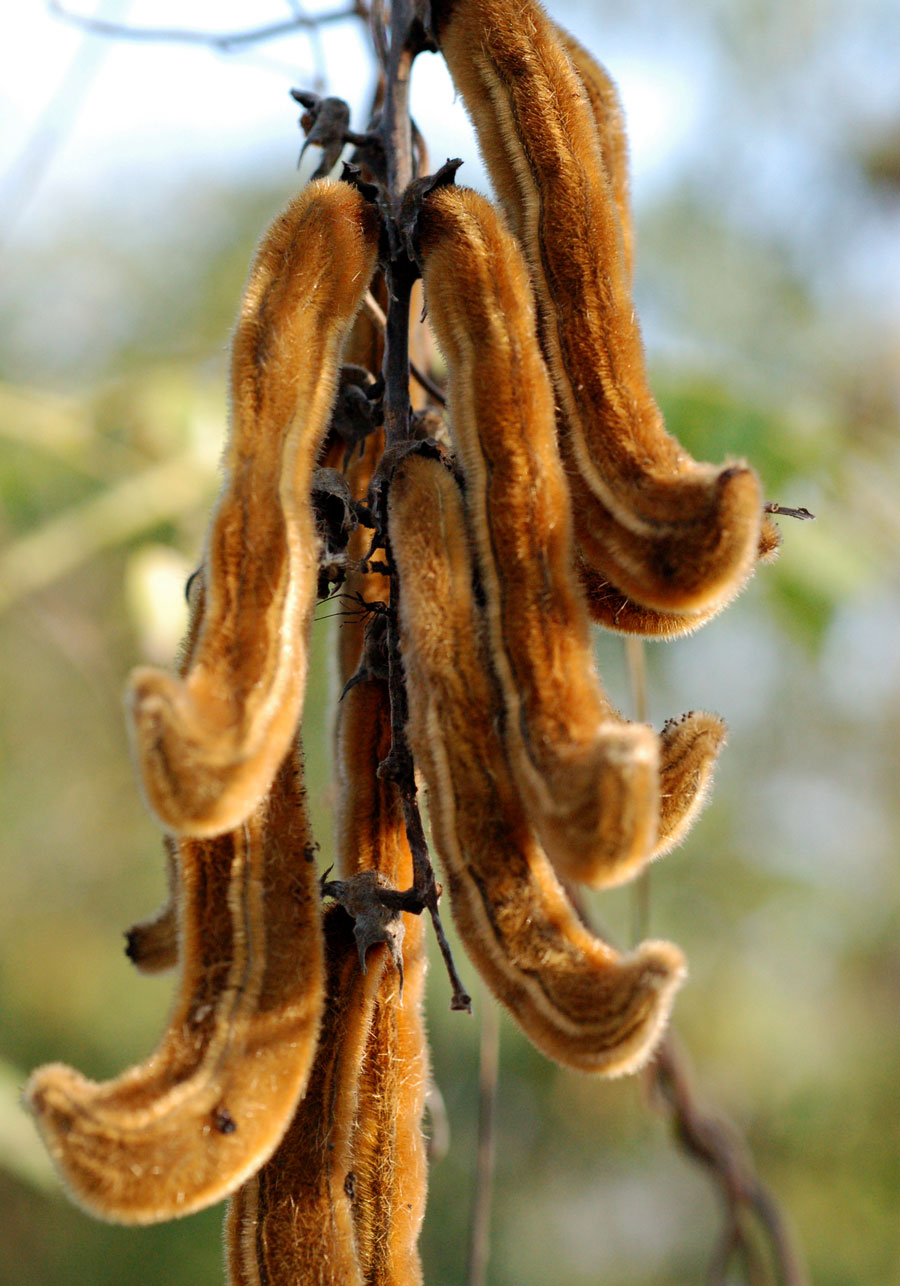 Harvesting and processing Mucuna is both delicate and labor intensive. Banyan Botanicals strongly believes in maintaining socially responsible relationships with farmers and is committed to following fair trade principles which include paying above-market wages, investing in the education of the farmers, and giving back to their communities. Furthermore, where and how an herb is harvested can impact sustainability. Herbs can be cultivated and harvested on private farms where sustainability can be managed, or wild-harvested in a legal way. If wild-harvested illegally, the long-term sustainability of valuable herbs can be threatened. Banyan ensures sustainability by sourcing the herbs used in its products from privately owned farms where it has been cultivated, or from legal wild-craft sourcing. The herb is harvested at optimal times, using environmentally sustainable practices that are sensitive to the long-term health of the plants. Being able to trace the herbs from field to shelf allows knowledge of where and how the herbs were grown. Banyan is able to ensure that organic farming practices are adhered to because we receive the ingredients from trusted sources whose methods have been verified and monitored. You can rest assured that Mucuna sourced through Banyan Botanicals will be organic and free of pesticides and other harmful chemicals.

Adaptogenic herbs can help modify the body’s reaction to environmental and internal stress. Learn more about these herbs and how they can support your health.

Which Form of the Herb Is Best for Me?

Choosing which form of an herb to take can be quite confusing! There are tablets, liquid extracts, powders, add the powder to a shake…the list goes on. In Ayurveda, each form of the herb has specific benefits that the practitioner takes into consideration when recommending a form of an herb. This article is to help you figure out which method of delivery will be beneficial for you and when to take it!