Haritaki: Getting to Know Your Herbal Allies

As one of the most well-known herbal allies in Ayurvedic and Tibetan herbalism, haritaki (Terminalia chebula) is deeply revered for its potent benefits. This respect is reflected in its many names—it is "the life giving," "the animating," "the unfailing," "the restorative," and "fearless against ill health."1 It is even called "the divine fruit" and "the medicine that rejects all diseases."2

Perhaps best known as one of the three fruits in triphala, Ayurveda's most popular formula, haritaki can hold its own among Ayurvedic herbs.

Haritaki is a large tree that grows throughout the deciduous forests of Central and Southern Asia and Sri Lanka. According to folklore, the first haritaki tree sprouted after a drop of amrit, the eternal nectar, dropped from the heavens upon the earth.3

Ayurveda uses the small green fruits of the haritaki tree, and harvesting these is no small feat. It requires a skilled tree climber to scale the tall trunk, sack in hand, and hand-pick each fruit.4 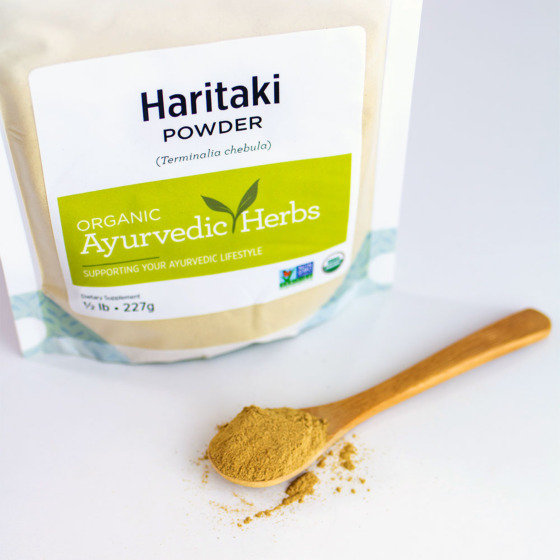 Another name for haritaki is hara, meaning green, which was undoubtedly inspired by those green fruits. As it happens, hara is also another name for Lord Shiva, and this is no coincidence. Connecting this tree to Lord Shiva, one of the principle deities of Hinduism, is a reverential way to acknowledge haritaki’s sacred nature.5

Haritaki’s exalted status is reinforced by its connection to the Medicine Buddha, who is often depicted holding haritaki fruit6 or a flowering branch of the haritaki tree.7 This placement speaks to the veneration Tibetan healers hold for haritaki.

To some, this correlation goes even deeper, seeing the very presence of haritaki as a reflection of the Buddha’s nature. As one doctor has written: “Myrobalan (haritaki)[…]underlines the nature of the Buddha of Healing.”8

Knowing this correlation, it is not surprising to learn that haritaki plays a central role in Tibetan medicine, and in fact, haritaki is called “the king of medicine.” As “the king,” it is present in almost all Tibetan herbal formulas!9 This certainly isn’t out of convenience, as haritaki does not grow in Tibet and needs to be imported.10

Haritaki’s herbal prowess has not been limited to the circles of Eastern healing modalities.

It was popular among ancient Greek, Roman, and Arab physicians, who played a critical part in spreading haritaki throughout the world.

It became so well-known that, in 1610, it even made a cameo in the play The Alchemist, written by the famous English playwright Ben Jonson. In this, a character describes a kiss as “So light, she melts like Myrobalan.”11 (Myrobalan is the English name for haritaki.) 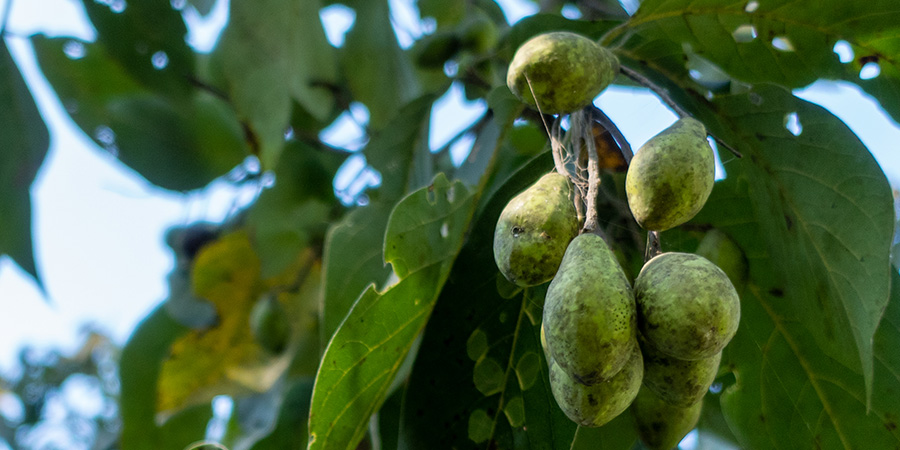 Taking a closer look at haritaki’s Ayurvedic properties, haritaki has the curious ability to both cleanse and rejuvenate. It is tridoshic, or balancing for all three doshas, although it is particularly well known for its ability to help in any vata imbalance.

This is connected to haritaki’s ability to support healthy digestion, especially for those who tend toward vata-type digestive imbalances, such as gas, bloating, variable appetite, and a wavering agni, or digestive fire (to learn more, check out this article on balancing vishama agni). Haritaki is also good for balancing vata-type elimination.

Beyond this, we don’t really know what makes haritaki tridoshic with the ability to remove any excess dosha. This is one of haritaki’s prabhavas, or unique, inexplicable actions (and yes, haritaki has more than one prabhava!).

Prana is the force that is present in every cell, in the subtle body, in the mind, and connected to our souls.

Prana powers the body and keeps the mind supple and adaptable. It bestows creativity, enthusiasm, and strength. It is all this and more. Without prana, there is no life.

This link to increasing prana could be behind the deep-rooted belief in India and Tibet that haritaki increases energy, intelligence, and awareness.14 These abilities could also support haritaki’s link to emotional health and its traditional use in alleviating grief and sadness.15 And perhaps this is even behind the claims that haritaki imparts strength and softens the effects of aging.16

These extraordinary actions could also be due to haritaki’s rasayana, or rejuvenative quality. This quality is very supportive to vata and the large intestine, but its rejuvenation goes deeper—it penetrates all seven dhatus (tissue layers), providing full-body strength and nourishment.

Haritaki's deep-reaching benefits support the proper function of the colon, lungs, liver, and spleen.17 And thanks to its effect in the deepest tissue layer, shukra dhatu (the reproductive tissue layer), it helps to enhance a healthy immune system.18

Interestingly, haritaki has a “scraping” action in the body, supporting the body in gentle cleansing and detoxification, which ultimately keeps systems running smoothly and can even help with maintaining a healthy weight.19 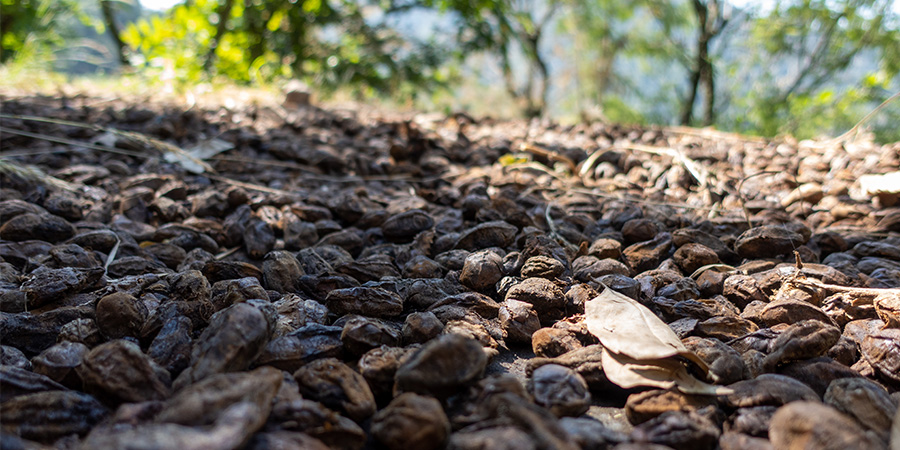 How to Use Haritaki in Your Daily Routine

Incorporating haritaki into your daily routine (dinacharya) is simple. It can be taken on its own or in a formula.

Take it on its own. Haritaki can be taken either as a tablet or in powder form. To support a specific dosha, take haritaki with one of the following anupanas (carriers):20

Haritaki can be taken year-round, and if you’re looking to bring overall balance to your doshas, simply adjust the carrier as the seasons change. Ayurveda gives us some pointers for this:

“As a tonic for promoting and preventing the effects of age, chebulic myrobalan [haritaki] should be taken every morning with salt during the rainy season, with sugar in the autumn, with ginger in the first half of winter, with long pepper in the second half of winter, with honey in the spring, and with treacle in the hot months.” —Traditional Ayurvedic instruction21

Take it in a formula. Haritaki does famously well in formulas—as is evident by its presence in almost all Tibetan formulas, as well as its role in triphala, which combines haritaki with amalaki and bibhitaki.

In triphala, these three herbs work synergistically to support natural internal cleansing, promote healthy digestion and regularity, and to bring deep nourishment and rejuvenation to the whole body. No wonder triphala is easily the most beloved formula in Ayurveda!

There are so many additional formulas that benefit from the presence of haritaki, let alone the addition of triphala. In our own formulas, you will find haritaki in everything from our Immune Strong to our Heart Formula, Joint Balm, Daily Swish, Chyavanprash—and the list goes on!

Banyan's organic haritaki fruit is the "amrita" variety. Apart from alluding to its divine origins, this type of haritaki is known to produce fruits that are especially fleshy in comparison with other varieties.

Like all of our herbs and products, our haritaki is sourced with quality, sustainability, and equitable trade practices in mind. The fruits are sourced from two different regions in India, where we have developed relationships with small suppliers whose high levels of integrity match our own commitment to sustainability and fair trade.

From the Northern part of India, we source certified Fair for Life Fair Trade haritaki that is carefully cultivated in a forest setting similar to where it would grow naturally on its own. In addition, we source haritaki from Western Central India that is ethically collected from its natural habitat and certified FairWild.

While seasonal cleansing is important, what we do after a cleanse can be even more so. These rejuvenation practices will help you feel renewed and replenished.

The Importance of Healthy Digestion
Gain a deeper understanding and appreciation of the role digestion (agni) plays in your overall health, and learn practical tools to keep your digestion strong.

1 Naveen Patnaik, The Garden of Life: an Introduction to the Healing Plants of India, (Doubleday: New York, 1993), 61.