The store will not work correctly in the case when cookies are disabled.
Skip to Content
SALE! 20% Off All Tablets with Code PLANTPWR | Shop Sale >>
Six Tastes

Kapha and the Six Tastes 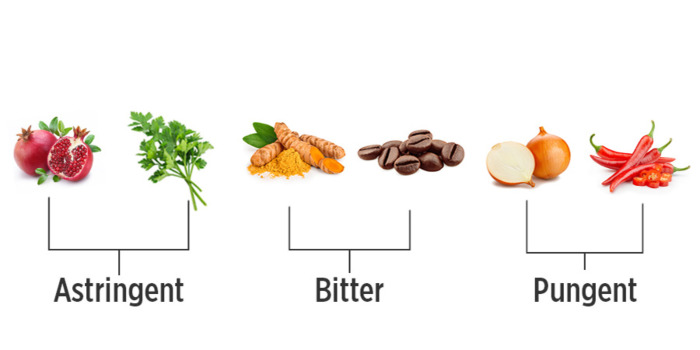 Kapha is primarily composed of the earth and water elements, which make kapha heavy, slow, cool, oily, smooth, dense, soft, stable, gross, and cloudy. Because of these characteristics, kapha is balanced by the pungent, bitter, and astringent tastes and aggravated by the sweet, sour, and salty tastes.

Below, you’ll find a deeper understanding of how each taste specifically affects kapha, as well as the impact that different flavors of experience can have on kapha.

The Pungent taste balances kapha because:

The pungent taste should be minimized when excess heat, excess acidity or any deficiency in the reproductive system are present. These imbalances are not typically associated with kapha, but can nonetheless be present in people with kapha constitutions or imbalances.

The Bitter taste balances kapha because:

The bitter taste should be minimized in cases of elevated vata, extreme excesses of the cold, dry, or rough qualities, emaciation, or a serious deficiency of any kind. While these discomforts are not typically associated with kapha, they can still be present in people with kapha constitutions or imbalances. The bitter taste is also best minimized during pregnancy.

The Astringent taste balances kapha because:

The astringent taste should be minimized in cases of elevated vata, constipation, or when there are blockages of any kind in the body. While these imbalances may not always be associated with kapha, they can be present in people with kapha constitutions or imbalances.

The Sweet taste aggravates kapha because:

The Sour taste aggravates kapha because:

The Salty taste aggravates kapha because:

Kapha and the Flavor of Experience

It is not surprising that we often use tastes to describe specific emotions, experiences, and personality traits. We associate compassion, kindness, and love with sweetness; we can picture a salty character, and we’ve inevitably encountered an exceptionally bitter human being at some point in our lives. While kapha is the most concrete of the three doshas, it is still influenced by the energetics of experience. When it comes to balancing kapha, there are a few important take away messages regarding the flavor of your life, relationships, and experiences.

Remember, Ayurveda views taste – from the most tangible sensory experience to the subtlest energetic influence – as an essential therapeutic tool. While each of the six tastes has a vital role to play, the perfect combination of tastes can vary wildly from one individual to the next. When it comes to balancing kapha, the pungent, bitter, and astringent tastes tend to be the most supportive, while too much of the sweet, sour, and salty tastes can quickly aggravate kapha.

If you feel like you need a more concrete understanding of any of the six tastes, or would like to see some examples of each one (in the way of foods, herbs, spices, emotional experiences, or mental attributes), please explore these introductory profiles:

Kapha-Balancing Diet
More For You
Kapha-Balancing Foods
Kapha is heavy, cool, oily, and smooth, so eating foods that neutralize these qualities—foods that are light, warm, dry, and rough—can help to balance excess kapha.
Six Tastes
Ayurveda places great importance on tasting foods. Rasa, the Sanskrit word for taste, has many meanings that only hint at the significance of taste in Ayurveda.
Related Products